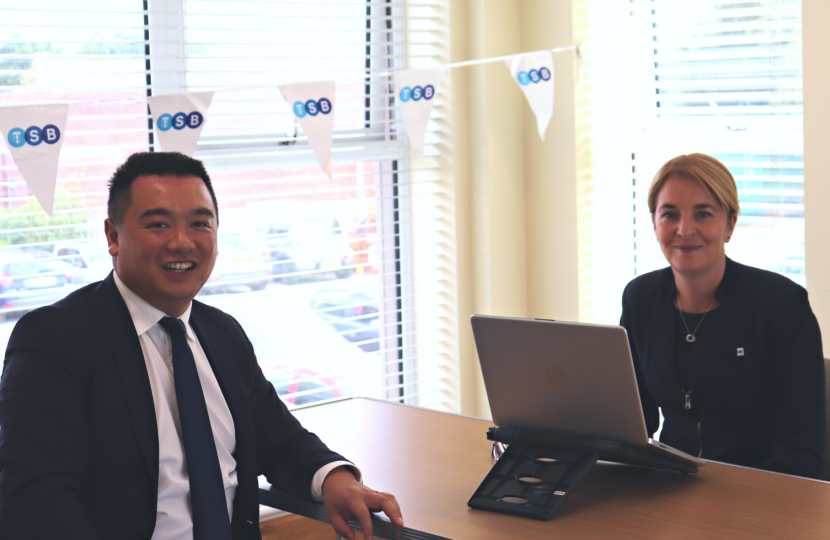 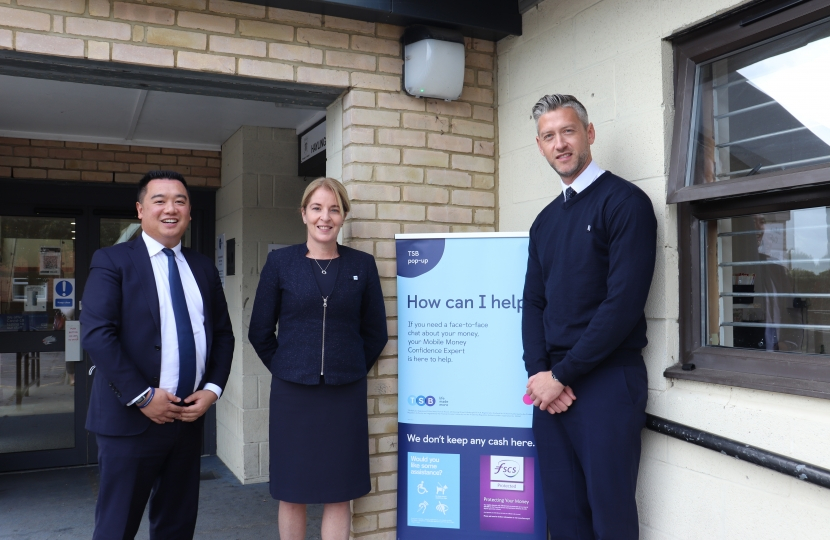 The bank announced last year that their Hayling Island branch would be closing, which Mr Mak found very disappointing. He took immediate action and wrote to the bank asking them to review their decision and introduce a pop-up service if the branch closed.

TSB is now operating the pop-up service at Hayling Island Community Centre every Thursday between 9:30am and 4:30pm. Residents will be able to access a range of face-to-face services and assistance with making payments and help with products.

Local MP Alan Mak said “When I heard TSB were closing their branch, I launched a campaign to introduce a pop-up bank so we retained some face-to-face banking on the Island and supported the Community Centre through room hire income at the same time. I’m pleased the pop-up bank is working well and I enjoyed seeing it in action. Thanks to all residents for supporting the campaign for a pop-up bank.”

Regional Director for TSB, Dan Pearson, said: “Although we’ve seen a significant rise in customers using digital banking, we know accessing banking services remains important to many customers and we’re always looking for ways to continue to help them. The Hayling Island pop-up service is here to help our local customers who still want access to a face-to-face service – so please do drop by if we can be of support.”

TSB has said it will be writing to customers who frequently used the old permanent branch, informing them of the new service and how they can use it.

Local MP Alan Mak has described the proposed closure of Hayling Island’s TSB branch as "very disappointing news" and has taken immediate action calling on the bank to review and reverse their decision.

As Hayling Island’s last permanent bank branch, Alan Mak has expressed concern that the closure plan was not subject to consultation with local residents and customers. Alan is also concerned about the impact of the closure on elderly and vulnerable residents. TSB is planning to close hundreds of branches across the UK including in Winchester and Petersfield.

In a letter to TSB Chief Executive Debbie Crosbie he has asked the bank to justify its decision, and  asked them to meet him to discuss the matter further.

Alan Mak MP said: "I’m very disappointed to hear about TSB’s decision to close their Hayling Branch in June 2021. Local people and customers were not consulted in advance of TSB’s decision. On hearing the news I immediately wrote to TSB’s Chief Executive asking her to reverse the decision. It’s vital that all customers, wherever they live, have access to over-the-counter services, and I hope TSB will continue to offer those services to Islanders in some form. I understand TSB are closing hundreds of branches across the UK including in Winchester and Petersfield, but I hope they will retain their service on Hayling in some form.”

I’ll be continuing to add updates on this page as they come in, and you can read my letter to TSB in full attached to this page.