LISTEN: Alan appeared on Times Radio to talk about the Bill

READ: The NHS Reserves Bill was endorsed in a leader column by The Times

Alan, who was serving as Vice Chairman of the Conservative Party at the time, presented his NHS Reserve Staff Bill to Parliament on Tuesday 24 November 2020, backed by then Health Secretary Matt Hancock. Alan's proposal is supported by current Health Secretary Sajid Javid. 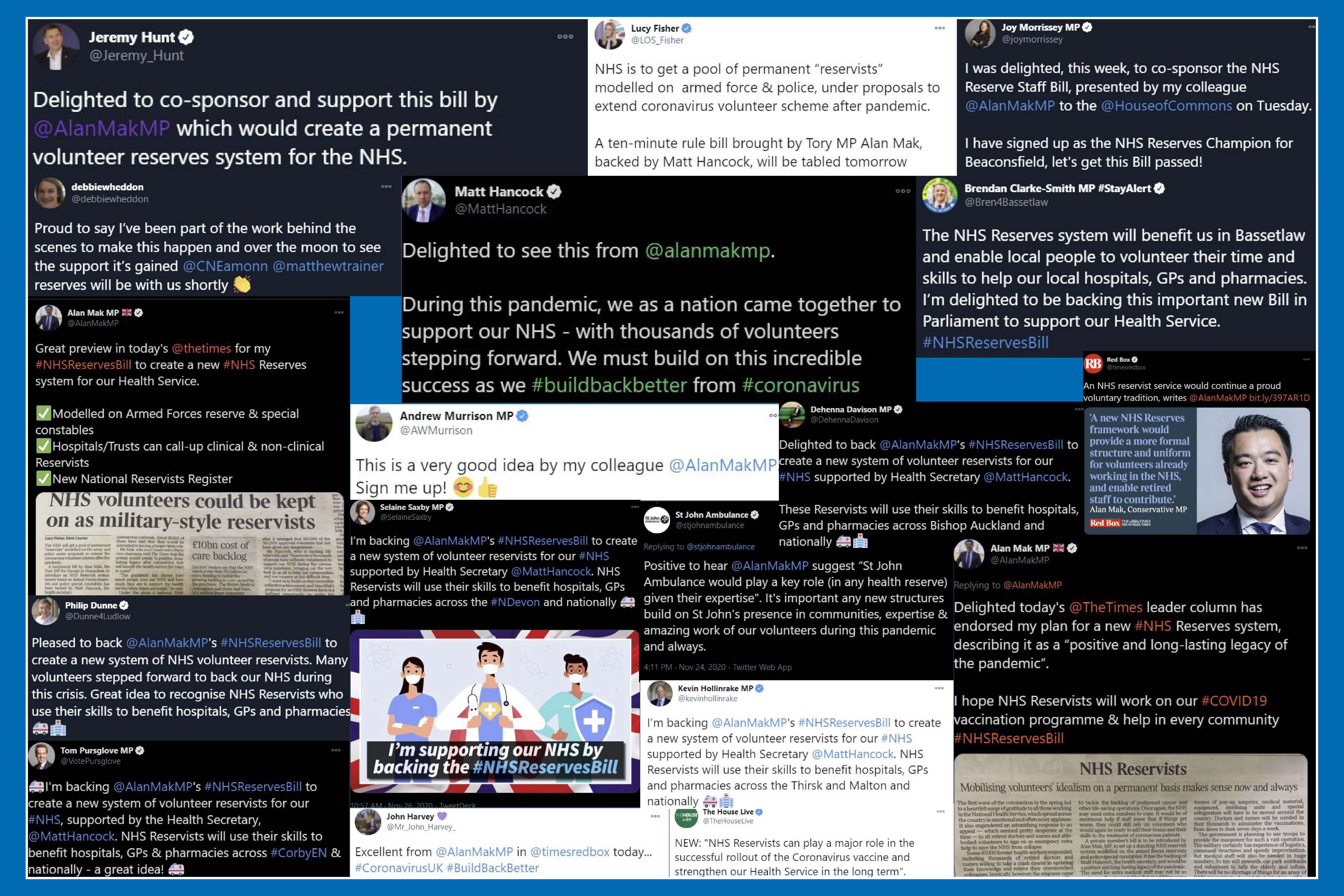 Alan’s Bill proposes a new, uniformed standing reserve of clinical and non-clinical volunteers which NHS hospitals, health trusts and other Health Service bodies can call upon when staffing demands increase. Scenarios where NHS Reservists could be called up include public health emergencies, seasonal increases in demand, large public events and protests, industrial action, and critical incidents such as terrorist attacks or major accidents.

Department of Health & Social Care figures indicate 47,000 former healthcare professionals (including retired doctors and nurses) volunteered to help the NHS during the Coronavirus outbreak, with another 750,000 non-clinical volunteers signing up online via the GoodSam app. NHS figures show that around 18,000 of the clinical returners are interested in a longer-term role, such as joining the NHS Reserves.

Alan’s proposal would harness this strong public desire to support the Health Service beyond the Coronavirus outbreak by creating a new, permanent NHS Reserves system to provide a formal bank of trained and vetted volunteer staff to support NHS hospitals and Trusts during periods of high demand for staff, supplementing (but not replacing) the NHS’s permanent staff.

NHS England is putting in place pilot schemes in all seven Health Service regions across England to explore how the new Reservists system could operate in practice, which will involve both clinical and non-clinical volunteers, including students who are taking part in the COVID-19 vaccination programme.

A new national NHS Reservists Register would be created to capture details about volunteers and their skills. NHS Trusts, hospital chief executives and other healthcare bodies would be able to access the Register to call-up Reservists with the skills needed at the time. Reservist disciplines would range from clinical roles such as doctors, nurses, healthcare assistants and carers to non-clinical roles such as drivers, electricians, logistics specialists, IT experts and communications professionals.

Alan Mak MP, the Bill’s author who came up with the NHS Reserves idea, said, “The pandemic has shown how much people love our NHS and how ready they are to support the Health Service when times are tough. The new NHS Reserves system will enable people to volunteer their time and skills and help their local hospital, GP or pharmacy – a positive, long-lasting legacy after Coronavirus that will benefit the Health Service in every region for years to come.”

Jeremy Hunt MP, Chairman of the House of Commons Health and Social Care Select Committee and the UK’s longest-serving Health Secretary said, “Volunteers have made a remarkable contribution to the Health Service during the pandemic, and I welcome the NHS Reserves as a new and permanent vehicle to retain and attract skilled people who can support our dedicated doctors, nurses and other healthcare workers.”

Alan says the NHS Reservist system could be expanded into the social care sector in the longer-term if it is successfully deployed in the Health Service across England. NHS Reservist will be vetted and must have up-to-date medical and other qualifications to be involved.

The Bill was also supported by a Leader Column in The Times, which can be read here (paywall), or see the attachment below.

You can also read the supporting media articles that Alan wrote in support of the Bill and watch his House of Commons Speech on this section of the website.

Other articles about and media coverage for Alan's Bill includes: