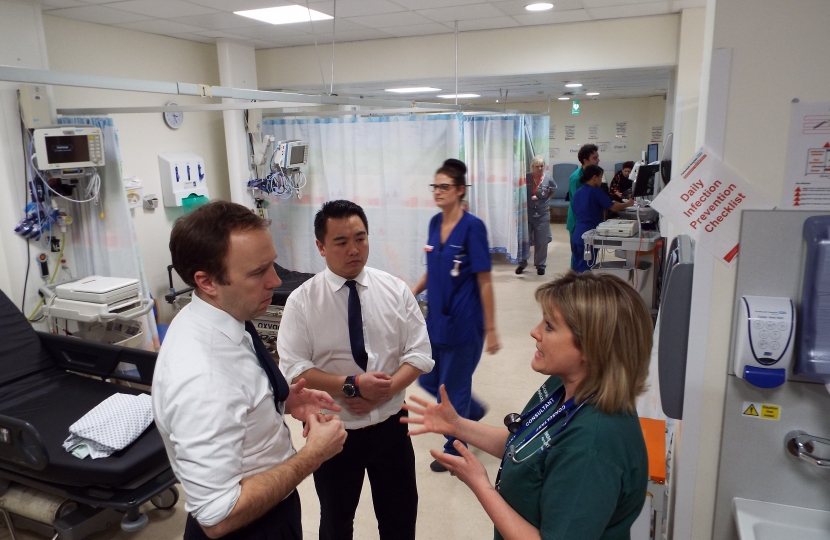 Alan has been campaigning for more NHS spending locally and for new technology to improve the NHS nationally.

His work locally includes spearheading a campaign for a new £60million new A&E floor at QA Hospital and securing the future of the Emsworth Victoria Cottage Hospital, while nationally he's campaigning for a fully digital NHS.

This campaigning work has resulted in a number of successes.

Alan has made campaigning for the extra money for the QA one of his top priorities, having seen first-hand at the hospital the need for a new emergency floor. During the last 12 months he’s written letters in support of the bid and met with the Health Secretary to make the case in person.

He argued that the emergency department at QA now sees up to 400 patients a day, up a third from 2010, meaning that it is often operating at capacity.

The new £60million emergency floor is expected to be completed by February 2021, with the money that Alan helped secure also going towards an acute mental health unit, and more diagnostic equipment among other things.

Alan said: "This new money will be vital to future-proof the hospital against our ageing population, and is part of the Government’s wider commitment of long-term investment into our NHS.”

Alan has been part of a community effort to ensure that the Emsworth Victoria Cottage Hospital is the site for a new doctors surgery in the town.

In the summer of 2018, he secured a key reversal by the NHS CCG, which meant that the site was taken off the market for sale while talks take place. Alan had argued that until the future of the Emsworth Medical Practice is confirmed no sale should go ahead.

Since then, he's hosted an important roundtable meeting attended by all of the key stakeholders including the NHS Clinical Commissioning Group, who decide if the site can be used for medical and health purposes; NHS Property Services, the owners of the building; the Emsworth Medical Practice; Havant Borough Council, local councillors and community group representatives from Emsworth.

At that meeting it was decided that the doctors and the CCG will work together to come up with a fresh proposal to use the Victoria Cottage Hospital site and continue to engage with NHS England on funding. Emsworth United, which represents the towns community groups, have pledge support to the process.

Alan has also been exploring how new technology can improve our NHS. A major report he wrote earlier this year, published by the Centre for Policy Studies, featured ten policy recommendations that were endorsed by the Government. The report has also been backed by the Health Secretary Matt Hancock. Alan will be continuing to campaign for his key goal of a paperless NHS within the next decade.

Some early successes have included the announcement of a new NHS App to book hospital appointments, repeat prescriptions and receive medical advice as well as a ban on the purchasing of all fax machines in the NHS.

He also been chosen to lead a Conservative party political broadcast about our NHS funding. See the YouTube video for more information.

Alan’s proposal for a NHS Reserve System, modeled on the military reserve system, would harness the strong public desire to support the Health Service beyond the Coronavirus outbreak by creating a new, permanent NHS Reserves system to provide a formal bank of trained and vetted volunteer staff to support NHS hospitals and Trusts during periods of high demand for staff, supplementing (but not replacing) the NHS’s permanent staff.

NHS England has put in place pilot schemes in all seven Health Service regions across England to explore how the new Reservists system could operate in practice.