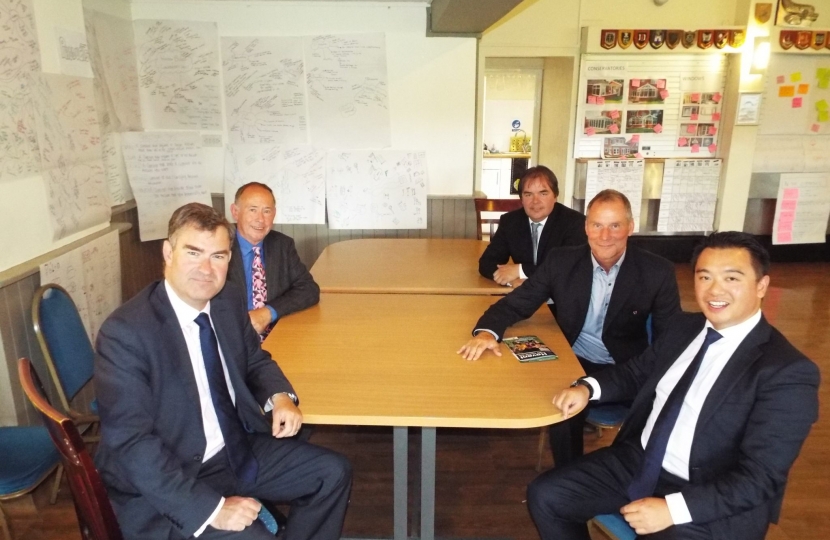 The Secretary of State for Work and Pensions has praised Havant’s low unemployment rates following a meeting with local business leaders, organised by MP Alan Mak.

David Gauke also heard about plans for further economic growth in the area, including projects such as Dunsbury Hill Farm and Solent Retail Park which are already creating work for local people.

Since 2010 the number of residents claiming unemployment benefit in the constituency has halved and remains well below the national average. Across the country the number of people in work is at the highest level since records began in 1971.

As well as updating the Minister on the local economic climate, members of the business community also had the chance to discuss a range of issues, including on the Government’s plans for Brexit.

After the meeting, which took place at Havant Rugby Club, Mr Gauke praised the work that has been done by the business community to create jobs and said he was impressed by the plans for economic growth in the area.

Mr Gauke said: “I was delighted that Alan invited me to Havant and it was excellent to hear how local businesses are creating jobs.

“With record levels of employment, more people across the country now have the ability to support themselves and their families. That means more children growing up with a working adult and more children who can see first-hand the benefits of being in employment.”

Since being elected as MP for Havant in 2015, Mr Mak has made a strong economy his top priority, including organising two successful Jobs and Apprenticeships Fairs which have attracted thousands of residents.

He said: “Our local economy is strong and I'm delighted the Work and Pensions Secretary agreed to attend my meeting with local business leaders to hear how firms in this area are expanding and creating employment. Although we have a vibrant economy and a very low level of unemployment we cannot be complacent. That’s why I’ll continue to help deliver projects which create work and growth such as my Jobs and Apprenticeships Fair.”