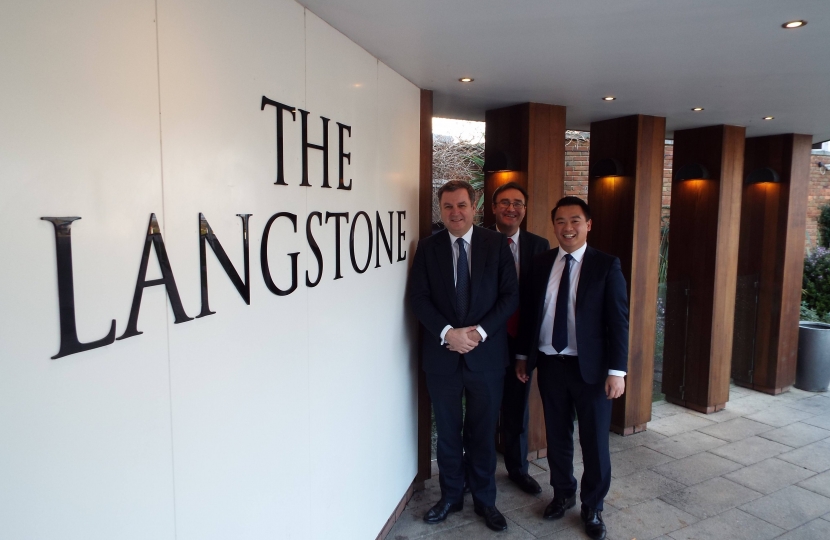 Senior Treasury Minister Mel Stride praised the role of tourism in boosting both the local and national economy following a visit to Langstone Hotel on Hayling Island.

The Financial Secretary to the Treasury, who grew up in the area and is a former pupil at Portsmouth Grammar School, toured the popular hotel, as well as meeting with local business leaders after being invited by local MP Alan Mak.

Mr Stride also heard about plans for further economic growth in the area, including projects such as Dunsbury Hill Farm and Solent Retail Park which are already creating work for local people.

Since 2010 the number of residents claiming unemployment benefit in the constituency has halved and remains well below the national average. Across the country the number of people in work is at record levels.

As well as updating the Minister on the local economic climate, members of the business community also had the chance to discuss a range of issues, including on the Government’s plans for Brexit.

Mr Stride said: “I was delighted that Alan invited me to Hayling and it was excellent to hear how the tourism industry is creating jobs for local people on Hayling Island, as well as boosting growth.”

The Minister also explained how the Autumn Budget is helping get the economy fit for the future.

He added: “The Government is backing businesses like the Langstone Hotel that power our economy, helping our young people to get on the property ladder, and making our tax system fairer so that we can continue to fund our vital public services.”

Since being elected as MP for Havant in 2015, Mr Mak has made a strong economy his top priority, with his third Jobs, Apprenticeships and Careers Fair returning on Friday 9 March at Havant Leisure Centre from 10am to 3pm.

Alan said: “Our local economy is strong and I'm delighted that senior Treasury Minister Mel Stride visited Hayling at my invitation and met local business leaders to hear how firms in this area are expanding and creating employment. Hayling Island has long history as a tourist destination, so it was great to show him around Langstone Hotel and for him to see how the tourism sector is contributing to our economy.”