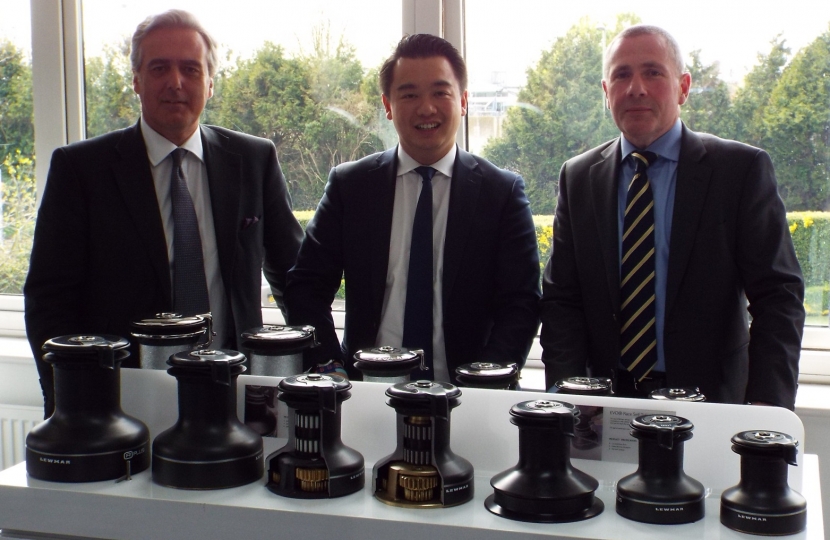 The Minister saw first hand how Havant businesses are excelling at innovation, engineering and exporting. Accompanied by Havant’s Conservative MP Candidate Alan Mak, Garnier was shown around the marine equipment manufacturer’s office that has traded from Havant for more than 60 years.

Since Mak was first elected he has made strengthening the local economy his top priority, and has been working to raise the profile of businesses in Havant, both in Westminster and internationally. His initiatives such as the Jobs, Apprenticeships and Careers Fair and Small Business Awards have successfully supported local companies to grow. Mak also led a trade mission to Hong Kong in autumn 2016 to promote Havant-based businesses including Lewmar which sells to clients at the Royal Hong Kong Yacht Club.

Mak said his new campaign builds on his work to date, and will help Havant future-proof its economy by selling to more markets around the world. He said only 11% of British firms export but the Havant area already contained world-leading manufacturers and exporters who could inspire others including Lewmar, Kenwood, Apollo Fire Detectors already export around the world.

Alan Mak said, “Our economy after Brexit is the key issue in this election, so having successful businesses who employ local people, and sell around the world is key to generating wealth for our area. I worked hard to get the International Trade Minister to come to Havant and see how our workforce and businesses are already selling Havant’s goods and services around the world. We must keep this up – and encourage others to do the same”

Mark Garnier said, “Alan has been a strong voice for Havant’s businesses and workers in Parliament and I was delighted to visit Havant to back his new export campaign. I enjoyed visiting Lewmar because it’s hard working exporters like them that help Britain earn its reputation as the world’s leading manufacturing and innovation centre. I hope local residents will back Alan on 8 June so he can continue his great work for his community.”

Peter Tierney, Managing Director of Lewmar, said, “Alan has been very supportive of local businesses as our local MP and we were delighted to support his new export campaign by welcoming Trade Minister Mark Garnier to our showroom and factory. Lewmar already exports around the world, and Brexit means more local businesses should follow our lead if they want to remain successful.”