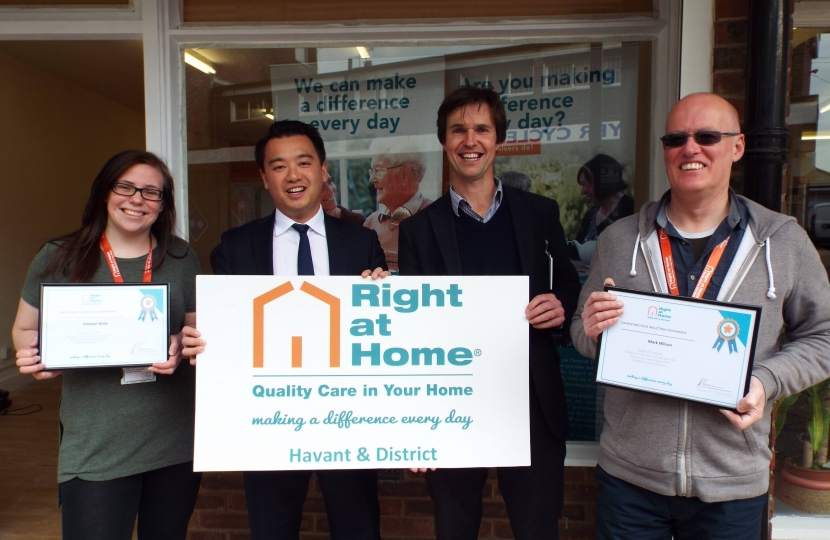 Happy New Year! I’m delighted to be back writing in the News and I hope all readers are looking forward to a successful year ahead.

For me ensuring that our area’s economy remains strong continues to be my top priority in 2018, and there’s much to be positive about.

Locally, unemployment is lower than the national average and those claiming out of work benefits has fallen by half since 2010.

Last year, I visited upgraded sites at Colt, Kenwood and FatFace, who opened a brand new distribution centre at Dunsbury Hill Farm. All of these are employing hundreds of local people, as well as contributing towards a strong national picture with more than 30million people in work across the country.

For anyone still looking for work, my Havant Jobs, Apprenticeships and Careers Fair returns to Havant Leisure Centre on Friday 9 March between 10am and 3pm for a third consecutive year. More than 60 exhibitors will be at the event, which is backed by the Jobs Centre, with hundreds of jobs and apprenticeships on offer.

Some of the people finding work last year included Becky Webb and Mark Wilson, who became carers at Right at Home, and I encourage anyone looking for work or thinking about a career change to come on the day to find out more.

Alongside increasing the number of people in work, this year the Government will also give the lowest earning workers a pay rise, with the National Living Wage increasing in April by 4.4 per cent from £7.50 to £7.83 - benefiting over 2 million workers.

Alongside this, further action is being taken to cut taxes for working people. The personal allowance, the amount you earn before you start paying income tax, will rise from £11,500 to £11,850. This means that in next financial year, a typical taxpayer is £1,075 better off than they were 5 years ago.

All of this means workers have more money to spend in our shops, multiplying around our strong local economy, and shows we have much to be positive about for 2018.