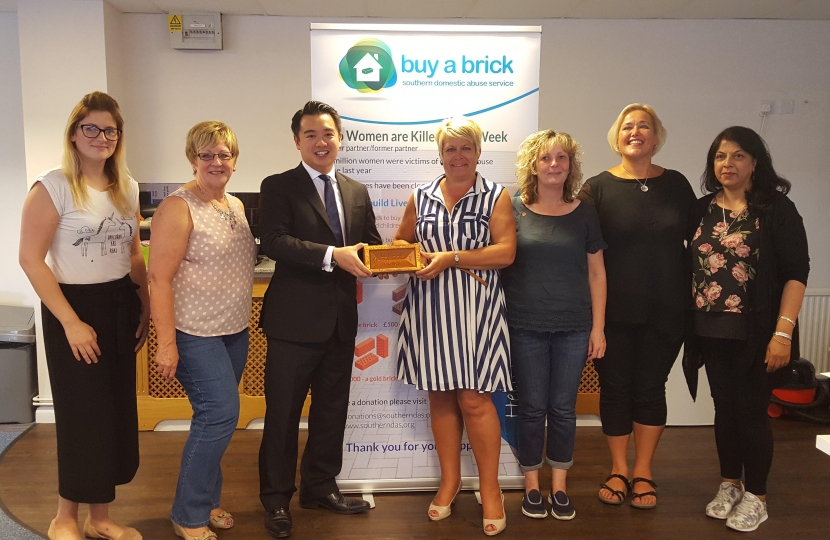 The Prime Minister Theresa May has backed a fundraising campaign by a local domestic abuse charity in a surprise tweet.

The message was in support of the Southern Domestic Abuse Service (SDAS), which is raising money through a ‘buy a brick’ campaign to build a specialist safe house in South Hampshire.

The endorsement from the Prime Minister was arranged by Havant MP Alan Mak, who is a strong supporter of the charity, having bought a brick for the campaign and raised more than £250 from a raffle at his Havant Small Business Awards last year.

In her tweet Theresa May said: “@AlanMak MP is a strong supporter of #Havant-based @SouthernDAS who help victims and survivors of domestic abuse. They’re currently fundraising for a new refuge through their “Buy a Brick” campaign: http://southerndas.org/buy-a-brick/”

SDAS has so far raised more than £60,000 to build the refuge, which if built would be vital in protecting women and children who are victims of domestic abuse.

Statistics show that in the last year 1.4 million women were victims of domestic abuse and two women were killed by their partners or former partners every week.  Moving into a refuge takes the victim away from the violence and can quite literally save their lives.

Alan said: “Theresa May has been a tireless campaigner on domestic violence and abuse, both as Home Secretary and Prime Minister. I was delighted to tell her about the important work being done by SDAS to build a specialist safe house in South Hampshire. Building a refuge in the region is vital and I urge everyone to get behind this excellent campaign.”

To buy a virtual brick and support the safe house campaign visit www.southerndas.org. Bronze, silver and gold coloured bricks can be ‘bought’ in return for donations of £25, £100 or £1000 and dedications and messages can also be added to the larger value bricks.

Claire Lambon, CEO of SDAS, said: “It was a big boost to our ‘Buy a Brick’ campaign to have the Prime Minister’s backing too. It is so important that refuge provision for victims of domestic abuse is maintained in South East Hampshire. We thank Alan for his continuing support of SDAS both locally and at a national level.”

Picture: Alan Mak MP with his brick and some of the team from SDAS