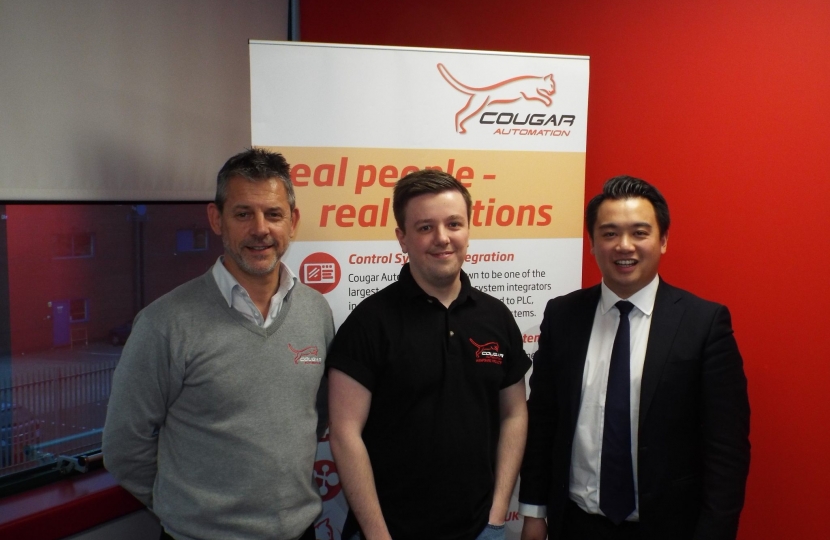 A graduate who found work after attending last year’s Havant Jobs, Apprenticeships and Careers Fair, organised by MP Alan Mak, has been spearheading the work being done by a local firm to develop cutting edge new technology.

Sam Fulcher visited the Fair after being encouraged by a family member and was taken on by Cougar Automation, who are at the forefront of the next generation of technological development, working on smart systems and cyber defence.

Alan is chairman of a cross-party group highlighting the impact of new technology on the economy in Parliament, known as the Fourth Industrial Revolution. Later this year he will be releasing a policy paper on new technology in the healthcare sector.

Cougar Automation will be at Alan’s third Jobs, Apprenticeships and Careers Fair, which returns to Havant Leisure Centre on Friday 9 March from 10am to 3pm. Representatives from dozens of industries from both the public and private sectors, ranging from the Armed Forces to engineering and retail, will be on hand to offer jobs and advice.

Alan said: “I was delighted to meet Sam, and hear about how he is building a career for himself at Cougar Automation. It is great that we have a local company that’s specialising in new technology and is at the cutting edge of the Fourth Industrial Revolution. I encourage anyone who is thinking about a career in tech or engineering to come on the day to find out more about some of the excellent firms we have locally that are offering highly skilled jobs.”

Cougar Automation has been working on projects involving the Industrial Internet of Things, a smart network of connected machinery, which is a natural extension of their work delivering control and automation systems to industry.

Sam said: “I went to Alan's Jobs Fair last year not knowing what to expect, but I was delighted to get a job working for a great company in Cougar Automation. I have really enjoyed particularly helping to develop new technology at the firm, and I encourage anyone thinking about a career in technology to attend Alan's Jobs Fair this year.”

Aside from businesses exhibiting, at the fair Havant Job Centre will be offering advice on the day, while free employability workshops will also be provided by the National Careers Service. A CV building workshop will be taking place at 10.30am and 1pm and a job interview technique workshop will be at 11.45am and 2.15pm.

Cougar Automation General Manager Derek Burton said: “We are delighted to be attending Alan Mak’s jobs fair again this year. We have always found these local events more successful than national ones allowing us to meet people with roots in the area who are committed to us for long term which allows us to invest and develop them to their full potential. Sam is a great example of local talent making a positive contribution to our business.”