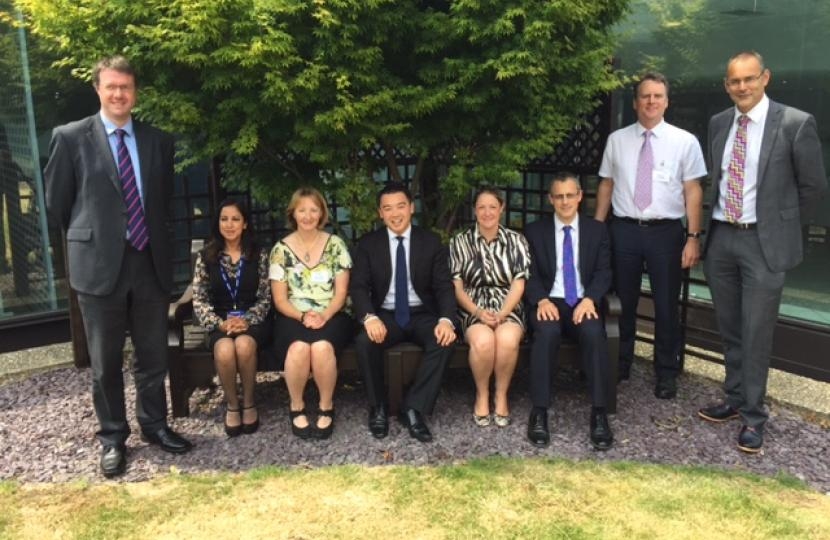 Havant’s MP and local secondary headteachers have sent a joint letter to the body which allocates school budgets in Hampshire to ensure that the area’s unique circumstances are taken into account when deciding the next round of funding.

Alan Mak MP, seven local headteachers and principals, and all six of Havant’s county councillors, highlighted that some Havant schools could see no increase in funding under one of the options proposed in a consultation produced by Hampshire County Council. This is despite some schools in more affluent areas of the county potentially benefitting by receiving increases to their budgets of more than five per cent.

Schools in Hampshire have been consulting on a number of options of how to distribute funding gains from the new National Funding Formula, which will give a £1.3 billion boost to the core school funding budget.

However, Havant's share of the gains has not yet been finalised and is in the hands of Hampshire County Council.

Following a meeting of secondary headteachers organised by Mr Mak, the group wrote to the Chairman of the Hampshire Schools Forum Simon Walker to highlight Havant’s unique needs, and to urge them to vote for the option that would secure for Havant schools the best levels of increased funding.

In the letter they said: “Given the Havant constituency’s areas of relative deprivation in contrast to the rest of Hampshire, its schools cannot afford to be neglected. Regardless of whether it may marginally suit more affluent areas of Hampshire generally, an endorsement of Option A or B would ignore the specific requirements of schools within poorer areas such as Havant, and would also undo the work undertaken to lobby on their behalf in Westminster.”

“Consequently we, as the Member of Parliament for Havant, all six Hampshire county councillors for the Havant constituency, and leaders of the secondary schools and colleges within the Havant constituency urge you to make the right decision, to prioritise the poorest areas of Hampshire and ensure they receive the support they need by endorsing Option C.”

The Schools Forum meets next Monday (11 December), to vote on which funding option to approve.

Speaking ahead of the vote, Mr Mak warned that his work to ensure that Havant would benefit from new National Funding Formula could be undone if the Schools Forum voted for a proposal that would benefit other areas of Hampshire at Havant’s expense.

He said: “Since I was first elected in 2015, I have been lobbying hard in Westminster to ensure that our local schools have a fairer level of funding. After making repeated representations to both the Secretary of State for Education and the Minister of State for Schools, I was pleased more money was secured from central government in the revised National Funding Formula (NFF). What could have been a £1.1 million loss for local schools was reversed, as a result of my leadership of a Hampshire-wide campaign to modify the then draft NFF.

“It’s now important that these gains are fairly distributed across the county, something the Schools Forum has the power alone to decide. I was pleased that in his response to our joint letter that Simon Walker recognised the work I have done on school funding and expressed sympathy with our cause. So I hope that the Schools Forum votes for a fair distribution gains across Hampshire when coming to its final decision.”

A copy of the letter to the Schools Forum is below and was signed by: 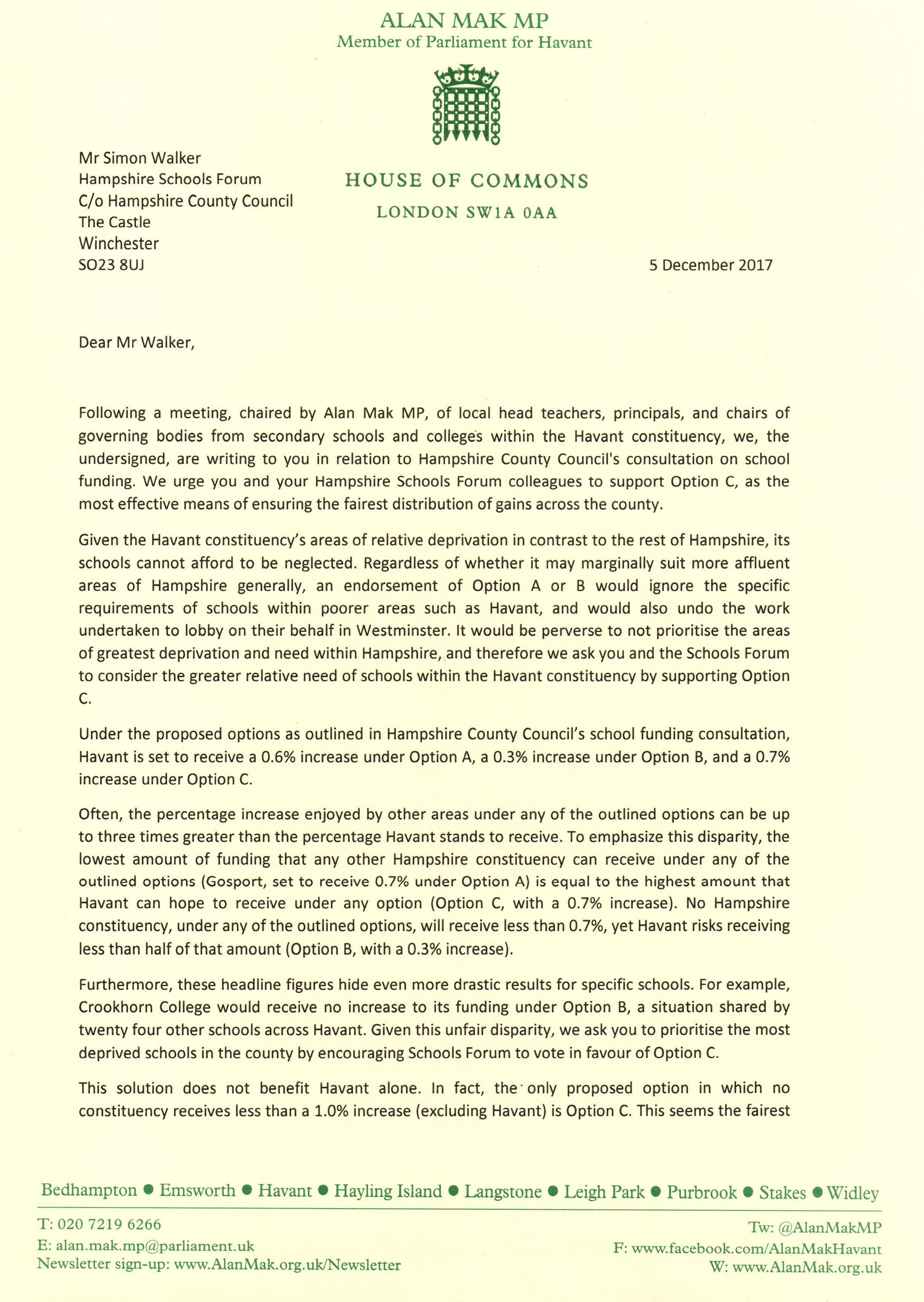 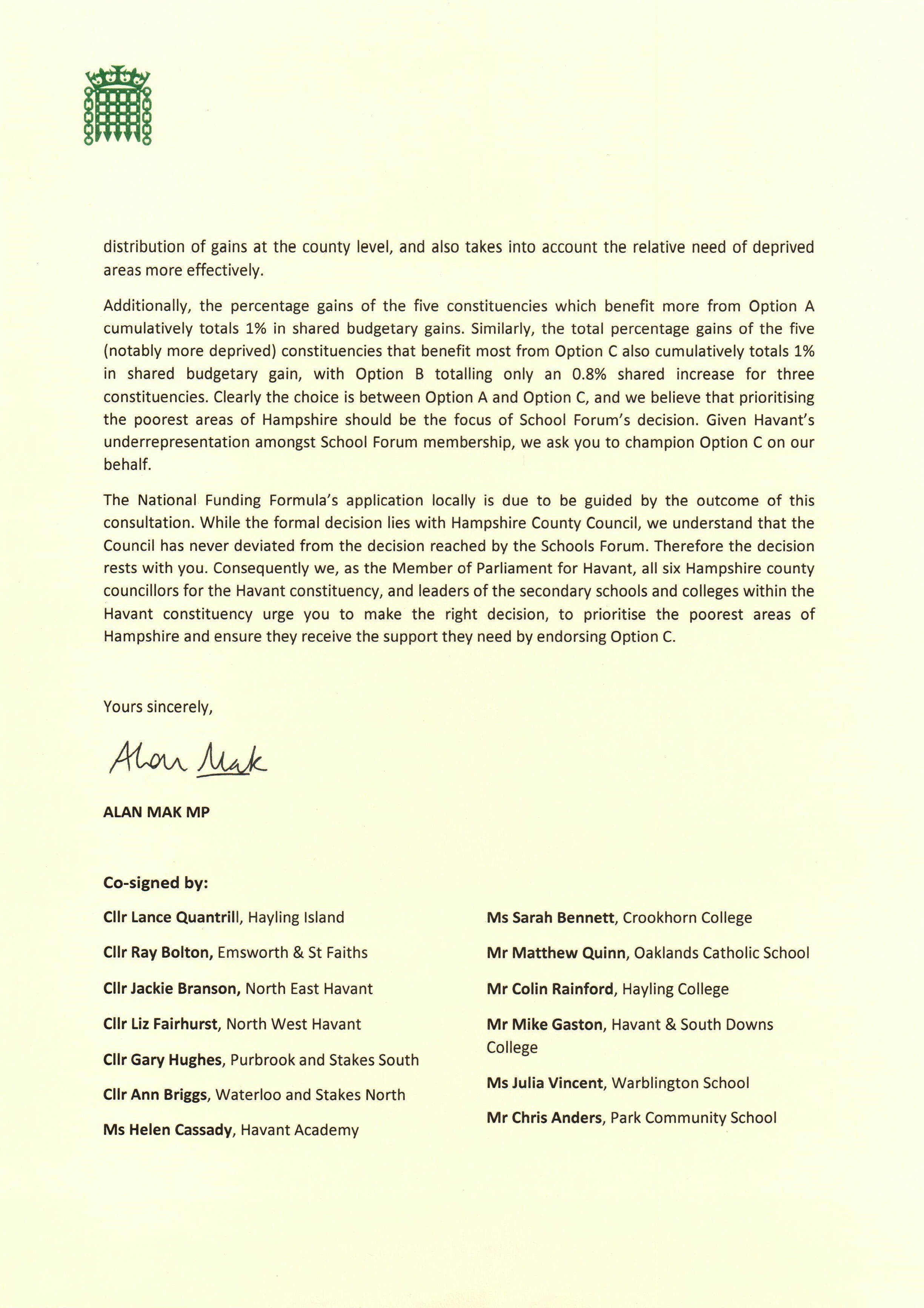