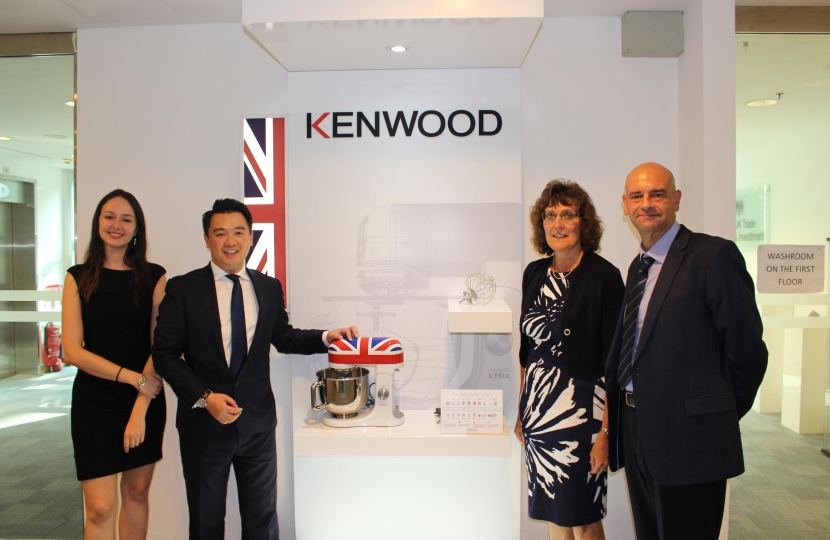 The international trading environment for local exporters was described as being “extremely positive” by MP Alan Mak following a trade visit he led to Hong Kong.

During the visit aimed at showcasing Havant-based firms to the wider Asia market, the Conservative MP met with representatives from the British Consulate in Hong Kong and Havant-based businesses to discuss how the UK could better its trading relationship with the former UK colony and the Greater China region.

As part of the trip Mr Mak spoke with representatives from Havant-based exporters including pharmaceutical giant Pfizer, home appliance maker Kenwood, and Lewmar, a manufacturer of small parts for boats based on Southmoor Lane.

All the companies spoke of a positive trading environment, which was hailed by Mr Mak as being an endorsement for Havant as a place to do business both locally and globally.

Mr Mak said: “Backing local businesses and strengthening the economy is my top priority as local MP. It’s so encouraging to hear that around the world Havant is highly regarded as a place to do business.  Selling more goods made in Havant abroad secures jobs here at home, and all the firms I spoke with in Hong Kong had exciting plans for the future. Brexit has caused uncertainty for some businesses so we must redouble our efforts to promote our exports.”

Mr Mak spoke with Kenwood representatives as the company prepares for the 100th birthday of its inventor and founder Kenneth Wood in October 2017. Ken Wood pioneered the electric kitchen mixer, which popular in Asia. Kenwood are key supporters of the UK Government’s GREAT export campaign, which showcases British exports worldwide.

He added: “For 54 years Kenwood has been a superb employer in Havant, helping the local economy grow and providing jobs for thousands of residents. I’m delighted that Kenwood remain as committed to Havant as they celebrate their centenary. They’re going from strength to strength in Britain and around the world as I saw for myself, and I am proud to support their future growth.”

Kenwood CEO Mark Welch said: “Our natural ties to Havant go back a long way and we were delighted to explain to Alan our plans for future growth both in the UK and internationally. The value of the Kenwood brand and products remains as strong now as when we first moved to Havant.”

During the visit Mr Mak also spent time meeting senior members of the Hong Kong government, the British Chamber of Commerce, and lobbied for the management of Hong Kong’s Dockyard to be outsourced to a British company. He also met British Consul General Caroline Wilson who heads the UK diplomatic mission in Hong Kong, and acts as the UK’s ambassador-equivalent in the colony.

Mr Mak also met sales staff working on behalf of Havant-based Lewmar, who sells boat parts such as anchors to clients in Asia such as Hong Kong’s prestigious Royal Yacht Club. The company’s reputation for high quality engineering and manufacturing is valued by Asian clients, and Mak was able to meet a range of boat owners who rely on the Havant-based exporters products.

Peter Tierney, Lewmar CEO, said: “Despite being a leading exporter of maritime equipment with a global outlook, our home very much remains in Havant. We use a network of dealers around the world and we were pleased that our Hong Kong representatives could explain to Alan our global operation. We feel positive that we can continue to expand our exporting operation.”

Mak added: “Havant’s successful economy means we export everything from kitchen mixers and medicines to boat anchors around the world. This was a very successful trade visit, and I was very proud as local MP to be championing our exporters to the world’s biggest markets.”

As founder and President of the Royal British Legion’s Young Professionals’ Branch, Mak also took time during his visit to lay wreaths at the Hong Kong Cenotaph and the Commonwealth War Graves Cemetery in Hong Kong, to honour British servicemen killed in Hong Kong during both World Wars.