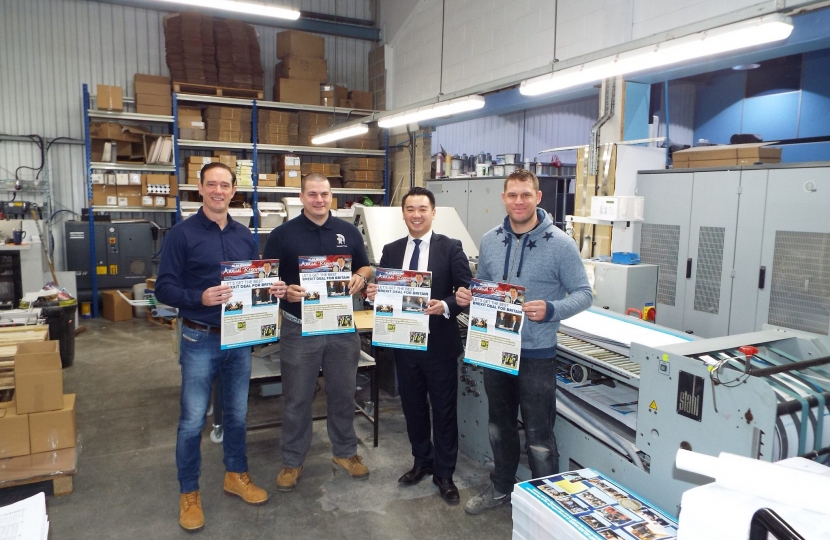 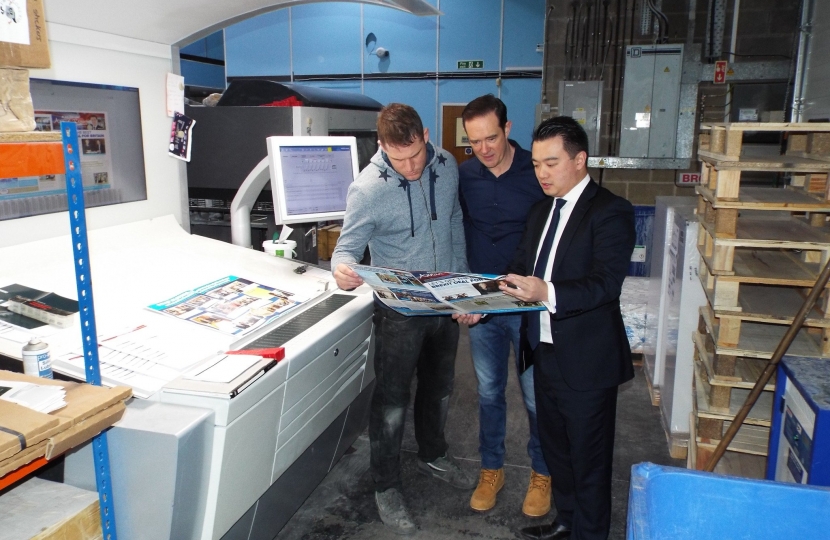 Local MP Alan Mak has launched his first annual report, covering the first 18 months since he was elected to represent Havant, with a copy being sent to every household in the constituency.

The report has been printed at Senator Press, with Mr Mak saying he was delighted to be supporting a local business. The New Lane firm was damaged by a fire two years ago, and Mr Mak has been fully behind their efforts to recover. He has directed all his printing business to them.

Looking back on his first year-and-a-half as Havant MP, Mr Mak said he was delighted to have met so many supportive community leaders, volunteers and residents.

In particular he thanked residents  for the “fantastic” support for his three community events – the Havant Jobs, Apprenticeships and Careers Fair, Small Business Awards and Older Persons Information Fair – have received. They will all be returning for a second year with the Jobs Fair taking place on Friday 3 March at Havant Leisure Centre and nominations for the Small Business Awards open at alanmak.org.uk/nominate.

Other stories covered in the report focus on Mr Mak’s parliamentary work experience with the Royal Navy and a trade visit he made to Hong Kong promoting Havant businesses.

He said: “As an active local MP, I engage with residents all the time, and this new annual report is a new idea that helps me report back on my work locally and in Westminster. It has been great to look back at the last 18 months. Having organised a range of successful community events myself, and attended many others, I want to thank all the local businesses, schools, charities and community groups who have supported me. I couldn't have done it without them".

“Getting the annual report printed at Senator Press was an added bonus, I remember coming here last year and they had just reopened following a devastating fire. Now looking round they are a thriving firm and I look forward to working with them closely in the future.”

Senator Press is a family-run business which was established in 1990.  The last 27 years have seen year on year growth and continual investment to become a state-of-the-art printing facility. The use of modern technology means Senator Press is highly efficient and has minimal impact on the environment, with a high percentage of waste being recycled.

Director Paul Cocker said: “It was great to show Alan around the site and tell him about how we have got back to being fully operational following the fire. We were delighted to print his annual report and we look forward to continue to support his three great community events.”

Pictures: Alan Mak with Paul Cocker and the team at Senator Press