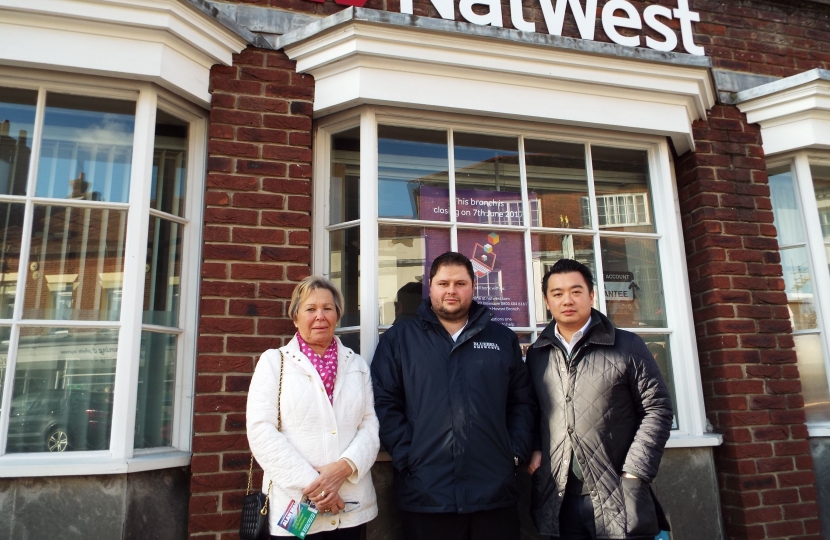 After being notified, Alan Mak MP immediately arranged to speak to Local Chief Executive Officer/Area Manager Sarah Wraith to find out more about NatWest's plans, and also wrote to the Royal Bank of Scotland Group Chief Executive Ross McEwan asking him to reverse the decision, and to commit NatWest management to meeting local community representatives to justify and explain their decision. See below for full text of the letter (in PDF and plain text formats).

Alan Mak MP said, "I’m very disappointed to hear today about the planned closure of Emsworth’s NatWest in June 2017 because local residents and businesses rely on our banks. I have responded immediately by writing to NatWest’s Chief Executive asking him to reconsider this decision, and I have invited NatWest to meet me and Emsworth community representatives in person. In the meantime, we must all continue backing Emsworth’s businesses to keep our local economy strong."

“NatWest have confirmed that their proposed branch closure is not a reflection on Emsworth’s economy, which remains strong, but their response to the declining number of transactions the Branch handles, and falling usage levels with many customers choosing to bank online.”

The EBA have launched a petition against the closure, backed by Alan Mak MP, which can be viewed below. Alan Mak MP has asked NatWest if they will take possession of the petition in due course.