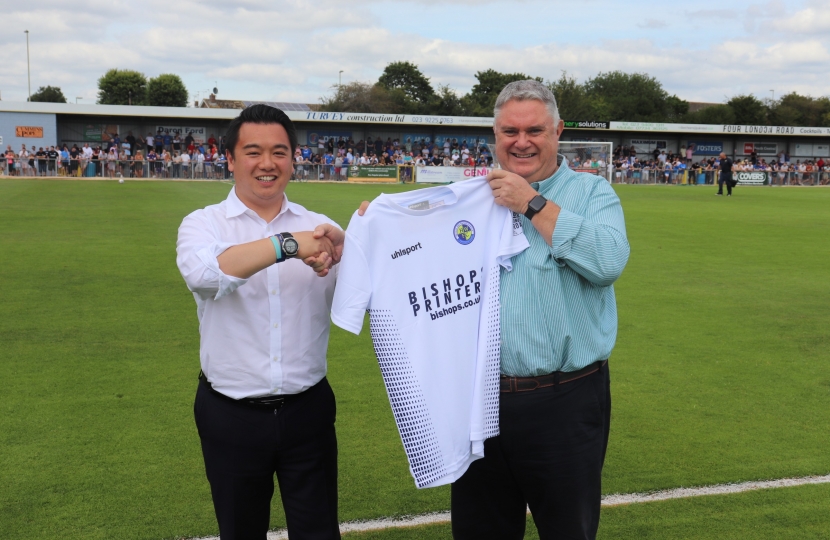 The Havant MP has been a season ticket holder at Westleigh Park for the past two seasons and is a strong supporter of local sports clubs. That includes being the President of the Havant Borough Sports Association.

The Hawks announced Alan as club Vice President at a pre-season friendly against Portsmouth FC.

Alan said he was delighted to have been appointed and looks forward to helping the club grow.

He said: “As a Hawks fan it’s an honour to be appointed as Vice President of Havant & Waterlooville FC. It is a real community football club, and I’ve followed very closely their success in recent seasons, including the back-to-back promotions into the National League.

“While it was disappointing to suffer relegation during the last campaign, I’m confident the side can bounce back under the management of Paul Doswell. With a strong leadership team under the ownership of Derek Pope, I look forward working closely to grow the club both on and off the pitch in my new role as Vice President.”

The Hawks kick-off their league season on Saturday 3 August at Westleigh Park against Welling United.

Club General Manager Adi Aymes said: “It was brilliant to announce Alan as our new Vice President. He has been a firm friend of the football club since being elected and we look forward to working with him to build our stature in Havant and the wider community.”

MP Alan Mak has encouraged residents to sign-up to join his Local Volunteer Network to support isolated and vulnerable members of the community during the Coronavirus outbreak.