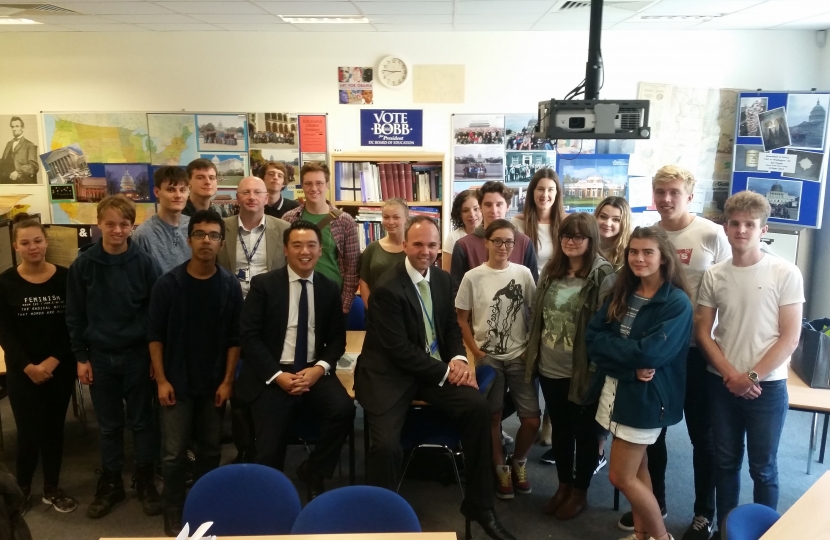 Politics students at Havant Sixth Form College were given a taste of what it takes to win an election, after being given a talk by campaigning expert and housing minister Gavin Barwell.

Mr Barwell defended Croydon Central, one of Britain’s most marginal seats in 2015, when he was re-elected with a majority of just 165. He was invited to speak to the A-level politics students by Havant MP Alan Mak, after releasing a popular book on his general election victory earlier this year.

How to Win a Marginal Seat: My Year Fighting For My Political Life, detailed the high-octane grassroots campaign that helped secure the Conservative election triumph in South London.

Pupils heard how the former senior government whip defied the polls, which had predicted a Labour win in the ultra-marginal seat, and fought a doorstep campaign, which meant he on average slept for fewer than four hours a night in the run-up to the election.

Mr Mak described it as a “fascinating talk” and thanked Mr Barwell for giving the students a first-hand account of what it takes to win general election.

Mak said: “For students wanting to get into politics what better way than to hear what it is like to win elections at the sharp end than from Gavin Barwell. Hopefully it will inspire the next generation of political activists no matter what party they support. Gavin gave a fascinating talk that explained all the steps needed to turn campaign ideas into action.”

The Minister also took questions from the 17 and 18-year-olds, including his thoughts whether the voting age should be changed and the UK’s future relationship with the EU.

Mr Barwell said: “It was thoroughly enjoyable to give a talk to such an engaging audience. The students had an excellent political knowledge and I am very grateful to Alan for inviting me to Havant.”

The book can be bought online at Amazon, for more information visit bitebackpublishing.com