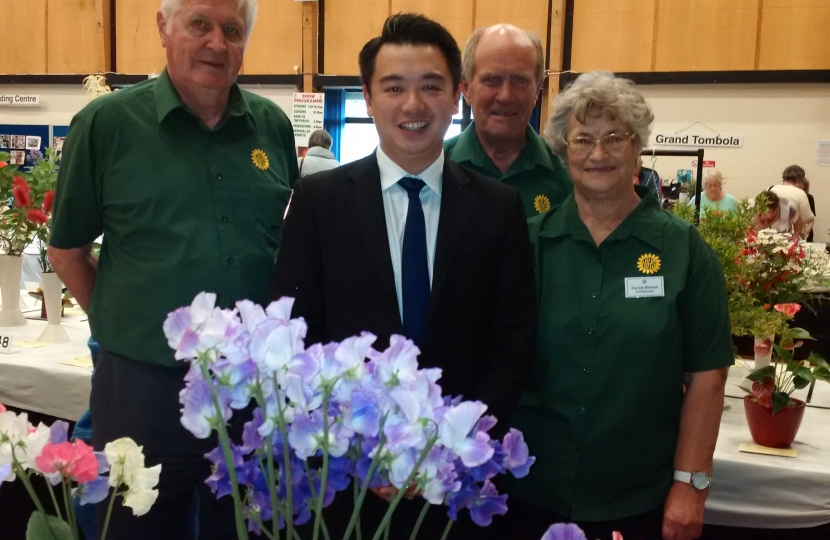 Local MP Alan Mak was guest of honour at Hayling Island Horticultural Society (HIHS)’s Summer Show on Saturday 25 June 2016 as he presented prizes at the Island’s top event for amateur gardeners. Mr Mak praised the ‘excellent entries’ put forward across a range of categories and spoke of the society’s key role in the community.

Hayling Island Horticultural Society was founded in 1886 and now encompasses nearly 900 households as members. The HIHS’s activities include a thriving Trading Centre where members can purchase gardening supplies at favourable prices, three flower shows a year, talks and demos, organised day trips, and a ‘100 + Club’ which offers companionship and friendly advice for gardeners.

Mr Mak was present at HIHS’s Summer Show, presenting awards for categories ranging from sweet peas and roses to cookery and handicraft. The show was complimented by afternoon tea and homemade cakes as residents contributed in force to the seasonal festivities.

The HIHS takes the lead in a range of community activities, including the Growing Together campaign to unite local children, for example from Mengham Junior School, and elder residents to look after the local environment. HIHS volunteers often work in collaboration with schools to educate youngsters on the importance of tree planting and maintain local flora and fauna populations.

Following the show, Alan Mak said: “I enjoyed handing out the prizes at Hayling Horticultural Society’s Summer Show. The standard of entries was incredibly high so well done to all those who took part. The Society plays a key role bringing together the community on Hayling, and I’m delighted they’ve put engagement with local schools at the top of their agenda. The Society’s reputation for delicious cakes and tea matches its great reputation for top-class horticulture!”

Chairman Bill Biggs said: “We were, once again, delighted to welcome local MP Alan Mak, who had again kindly agreed to present the Trophies to the various class winners. The magnificent display of Championship Classes of Roses and Sweet Peas were a sight and smell to behold!”

Mr Biggs added: “Alan spent a good deal of time talking with the Horticultural Stewards and Members, as well as the Exhibitors, and members of the Public. He did, however, find time to enjoy a rewarding cup of tea and cake! We are very grateful to our MP for spending time with us.”

Mak has been a strong champion of local ecology and the environment since his election in May 2015. He has supported work to protect Hayling’s coastline and gave his backing to Sinah Common Honey’s crowd-funding attempts to rebuild damaged apiaries following Storm Katie in March 2016. The Havant MP also showed his own green-fingered enthusiasm recently as he visited Hayling’s popular Tibble’s Florist who celebrated their 80th anniversary this year.