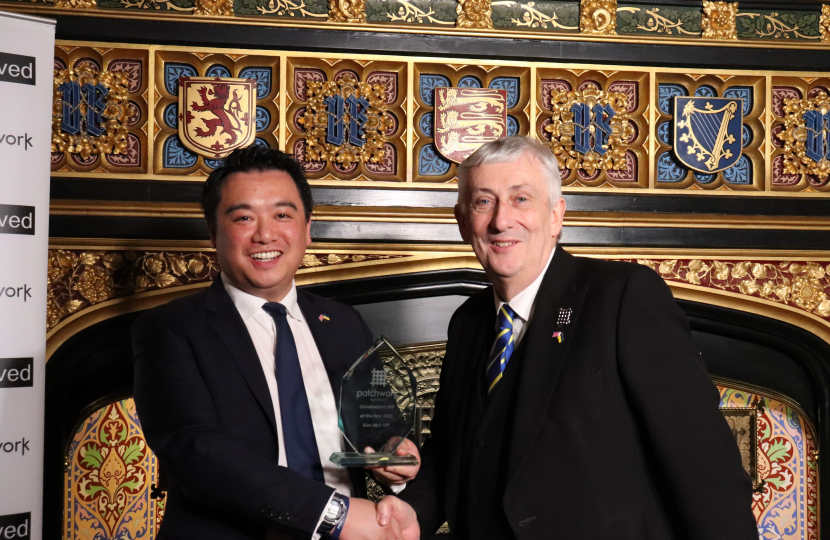 Local MP Alan Mak has won the Conservative MP of the Year Award at the annual cross-Party MP of the Year awards hosted by the Speaker of the House of Commons.

Mr Mak was presented with the award by Mr Speaker, Sir Lindsay Hoyle MP, in Speaker’s House at an evening ceremony on Wednesday 16 March 2022. He was nominated by the public to receive the award, and then selected by a panel of independent judges as a winner. Judges included Matt Hyde OBE, Chief Executive of the Scouts Association.

Alan Mak MP was recognised for creating his Havant Constituency COVID-19 Local Volunteer Network, which saw 400 local volunteers work to support vulnerable communities during the pandemic in Emsworth. He’s also worked to support working class children in maximising their potential in life through his work with Magic Breakfast, the charity that has established school breakfast clubs in local schools in the Havant Constituency.

Local MP Alan Mak said: “Winning Conservative MP of the Year is a great honour. Thank you to Havant Constituency residents for their ongoing support, and special thanks to the 400 people who joined my Local Volunteer Network to support vulnerable people during the Covid lockdowns by delivering food and prescriptions.”

Rt Hon Sir Lindsay Hoyle MP, Speaker of the House of Commons, said: “It is fantastic to see the 9th annual MP of the Year awards return to Speaker’s House, to celebrate the hard work of MPs throughout 2021 – to support, champion, and engage under-represented communities”.