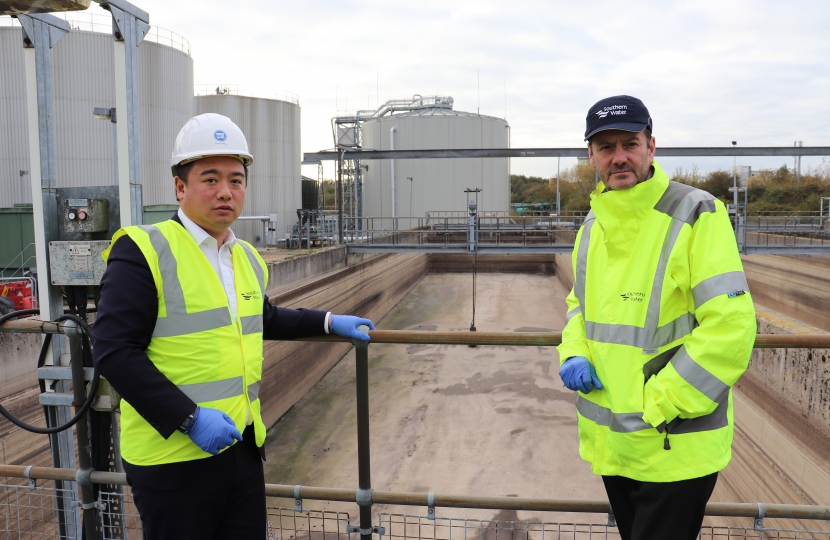 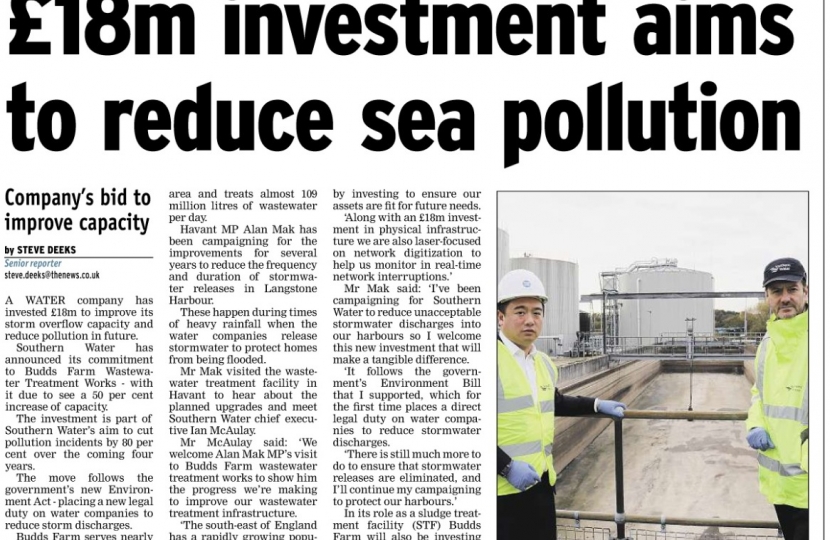 Local MP Alan Mak has welcomed £18millon of investment by Southern Water into improving Storm Overflow capacity at Budds Farm that will increase capacity by 50 per cent.

Mr Mak has been campaigning for the improvements for several years in order to reduce the frequency and duration of stormwater releases in Langstone Harbour. These happen during times of heavy rainfall when the water companies release stormwater to protect homes from being flooded.

Budds Farm Wastewater Treatment Works serves nearly 410,000 people living in and around Havant and the wider area and treats almost 109 million litres of wastewater per day.

The infrastructure investment is part of a wider package of measures announced by Southern Water as it aims to meet a target of cutting pollution incidents by 80 per cent over the next four years.

Mr Mak has been campaigning for improved water quality in Langstone Harbour for several years. He created and launched the Southern Water Regional Forum to put pressure on Southern Water by bringing together MPs, community representatives, officials from the Environment Agency and local government with Southern Water’s Chief Executive to drive improvements to the Harbour.

Mr Mak said: “I’ve been campaigning for Southern Water to reduce unacceptable stormwater discharges into our harbours so I welcome this new investment that will make a tangible difference. It follows the Government’s Environment Bill that I supported, which for the first time places a direct legal duty on water companies to reduce stormwater discharges. There is still much more to do to ensure that stormwater releases are eliminated, and I’ll continue my campaigning to protect our harbours.”

In its role as a sludge treatment facility (STF) Budds Farm will also be investing in expanding its capacity to store and treat sewage sludge. This is part of Southern Water’s long-term strategic plan to prepare for future population growth and start to build in future capacity. The sewage sludge treated at this site is crucial for local agriculture while this expansion will also result in build ups from smaller treatment sites becoming less likely.

Ian McAulay, Southern Water’s CEO, said: “We welcome Alan Mak MP’s visit to Budds Farm wastewater treatment works today to show him the progress we’re making to improve our wastewater treatment infrastructure. The south-east of England has a rapidly growing population, and we must ensure we can serve our customers by investing to ensure our assets are fit for future needs.

“Along with an £18m investment in physical infrastructure we are also laser-focused on network digitization to help us monitor in real-time network interruptions.”