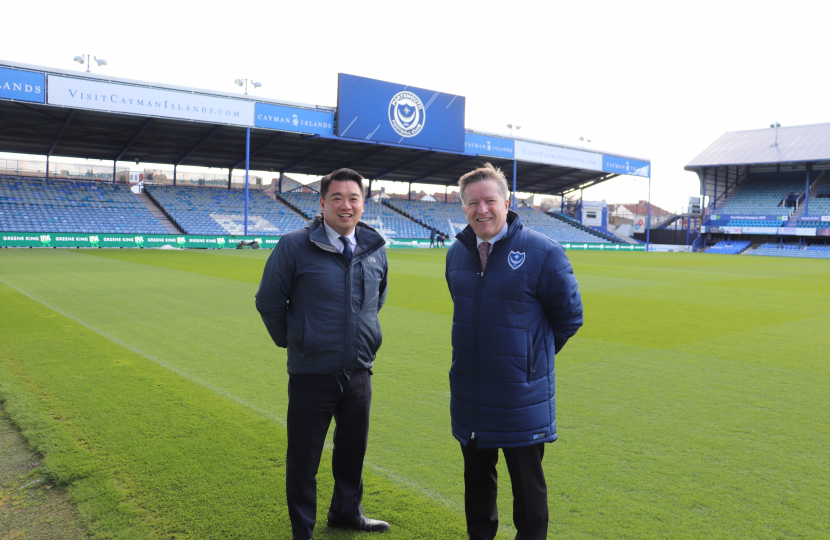 Mr Mak visited the home of Pompey and met with CEO Andrew Cullen for a tour of the grounds. The Havant MP also had a sit-down meeting with Mr Cullen to discuss the support that the Club provides to Havant.

The Club is currently investing over £11million in an exciting plan to redevelop their ground at Fratton Park. Currently, the Club is improving the North Stand and reprofiling the South Stand to improve safety, better sightlines and increase concourse space. Work will then begin on the Milton End in 2023. At the conclusion of the current works, the stadium’s current restricted capacity of just over 15,000 will increase back to over 20,000.

Mr Mak also thanked Mr Cullen for the support that Portsmouth FC provides to the Havant Constituency. Currently, Portsmouth’s Women’s Team plays and trains in the Havant and Waterlooville ‘Hawks’ Football Club’s grounds, where Alan Mak MP is the Vice President. The Club has been among many to benefit from Government funding which is enabling the Women’s team to take their game to the next level.

Local MP Alan Mak said: “I want to thank Andrew Cullen for meeting me at Fratton Park, and for the continued support he is offering to the Havant Constituency by having the women’s team play at the Havant and Waterlooville FC stadium.”

Portsmouth Football Club CEO Andrew Cullen said: “Thank you to Alan Mak for coming to visit Fratton Park again to see the new work we are undertaking. At Portsmouth FC, we are always looking to support the communities that support us and the Havant area provides very strong support for Pompey. We are delighted that the Portsmouth Women’s team are able to play in Havant, supporting the local Hawks team and their ground through our joint commercial partnership, concession and bar sales.”