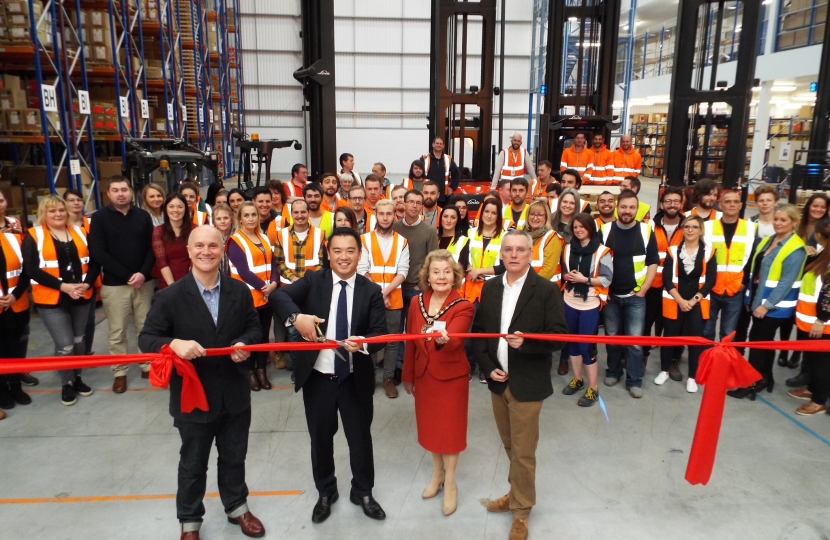 Local MP Alan Mak has welcomed the Government’s Budget announcement for a post-Brexit Solent Freeport which includes a key site in Leigh Park.

Alan has backed the bid from the start, lobbying Ministers and writing to the Chancellor in support of the proposal. At the heart of the bid is using Dunsbury Park as a new economic tax site and the gateway to the international ports based in Portsmouth and Southampton.

The Government proposes to offer tax reliefs to businesses within Brexit Freeport tax sites like Dunsbury Park incentivising businesses to create jobs and attract inward investment. This is positive news for Leigh Park and the Havant area.

The Solent LEP estimate that the new freeport will attract £2billion investment and create 52,000 jobs; through opening the potential to bring tax reliefs, simplified customs procedures and streamlined planning processes to promote regeneration and innovation.

Alan, who voted to deliver Brexit last year, welcomed the proposals which will ensure that the referendum result in Havant and Leigh Park delivers new high-quality jobs for local residents.

Dunsbury Park is already a successful industrial park on the edge of Leigh Park, with Alan having opened FatFace’s new national distribution centre there in 2017.

He said: “I backed the Solent Brexit Freeport bid which includes a site at Dunsbury Park and I’m delighted it’s succeeded. This will create new high-quality local jobs for Leigh Park and Havant residents, especially important as we begin the recovery from Coronavirus.

“In Parliament, I consistently voted to deliver the result of the EU Referendum and I’m delighted to see the benefits Brexit is starting to bring for our area.”

Alan also backed the other announcements made by the Chancellor in the Budget, which include further measures to help local residents feeling the impact of Coronavirus.

He added: “The Budget helps local people and businesses by extending furlough, providing additional grants for the self-employed, extending the Universal credit uplift and funding our hospitality businesses to re-start.”

Picture: Alan opened the FatFace distribution centre in Dunsbury Park that will be part of the Solent Freeport

Local MP Alan Mak has welcomed the announcement that the Havant Constituency will receive another £75,000 today to support key cultural and heritage organisations as they reopen and recover from coronavirus.