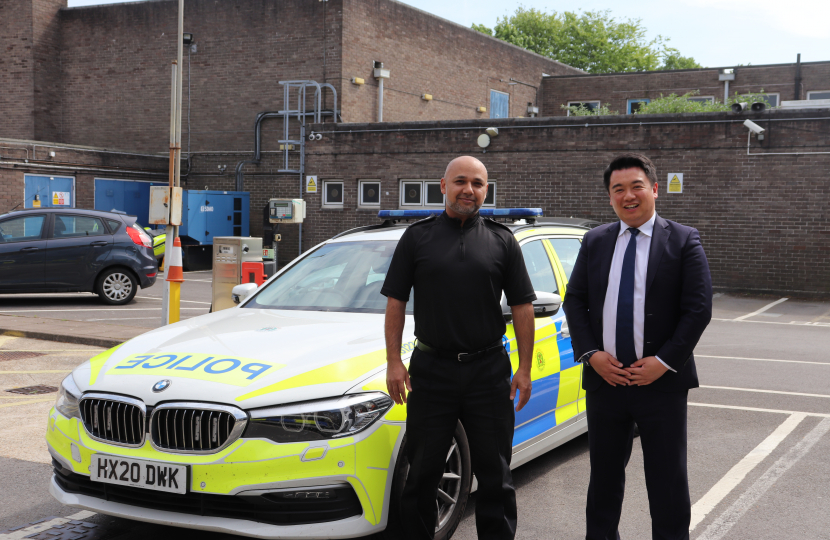 Local MP Alan Mak has met the new Police District Commander for Havant and East Hampshire, Chief Inspector Habs Rahman, to congratulate him on his appointment to the role and to discuss local policing priorities in the Havant Constituency.

Chief Inspector Rahman joined Hampshire Constabulary in 1996 as a Police Constable, and was promoted to Police Sergeant in 2007. He then transferred to Sussex Police on promotion as an Inspector, having spent a year as the Critical Incident Inspector for West Sussex, and then the Operations Inspector, with responsibility for planning and managing major events in West Sussex.

Following three and a half years in Sussex, Chief Inspector Rahman is now back in Hampshire and has been appointed Havant and East Hampshire’s new Police District Commander.

Local MP Alan Mak met with Chief Inspector Rahman to discuss his priorities for policing in the Havant Constituency, which include visible policing in all parts of the Constituency including Emsworth, and tackling anti-social behaviour, domestic abuse, and county lines drug smuggling.

Mr Mak also expressed his interest in working with Chief Inspector Rahman to facilitate more local Neighbourhood Watches and Community Speed Watches, as well as supporting the current recruitment for more Special Constables into the force.

Local MP Alan Mak said: “Chief Inspector Rahman’s story is a truly inspirational one and an example to us all. I was delighted to welcome him to his new post as Havant Police District Commander to discuss my local policing priorities. I am looking forward to working closely with him in the future.”

New Havant Police District Commander Habs Rahman said: “Thank you Alan Mak MP for coming to meet with me to discuss how we can work together. I want to ensure that Havant residents have a police force they can trust to call on when needed, and that will tackle pertinent local crimes. I look forward to working with Alan, our partners and our local businesses and residents, on this in the coming months.”