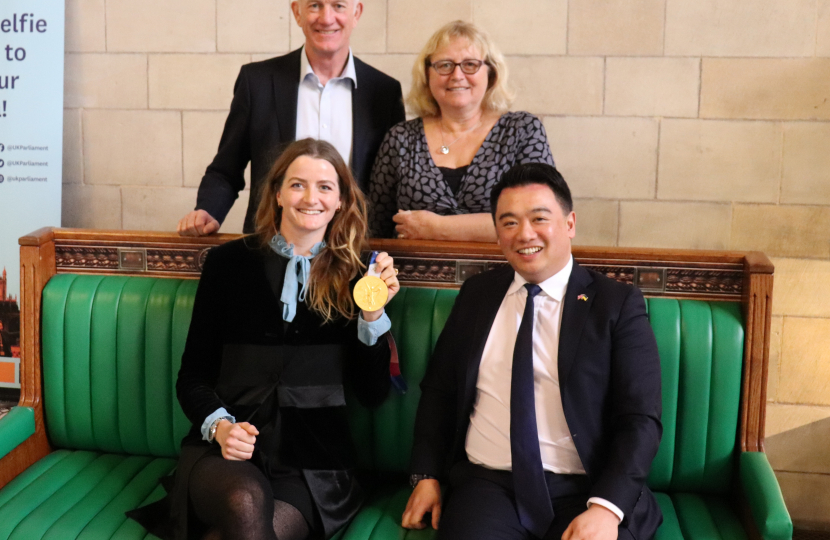 Local MP Alan Mak has welcomed Hayling Island sailor and Olympic Gold Medallist Eilidh McIntyre and her family to the Houses of Parliament.

During her visit, Alan Mak MP gave her and her family a tour of the Parliamentary estate and discussed Government funding for sports including sailing.

Eilidh won a Gold medal last year in the 2020 Tokyo Olympic games in the 470 class sailing event, alongside her teammate Hannah Mills. Her father, Mike McIntyre MBE, also won a gold medal in the Seoul 1988 Olympics in the Star class, and joined Eilidh for her visit to Parliament.

Alan Mak MP showed Eilidh and her parents around the Parliamentary estate, before sitting down to discuss Government funding for sports, which Eilidh says was crucial to her success in Tokyo. Mr Mak also congratulated Eilidh on her sporting success and being awarded the MBE in the New Year’s Honours list last December.

Local MP Alan Mak said: “Eilidh’s sailing success has inspired us all, and brought a feel good factor to Hayling Island and the wider Havant Constituency. I was delighted to host Eilidh and her family in Parliament to congratulate her and to pledge my support for continued Government funding for our Olympic athletes. Eilidh’s success shows that talent and hard work can deliver world-class results when backed by the right funding and support. British Sailing continues to be a great success story, and we’ll all be cheering on Eilidh and Team GB as they train for the Paris 2024 Olympics!”

Eilidh McIntyre MBE said: “Thank you to Alan Mak MP for your support and welcoming me and my family to Parliament. Government funding support has played a key role in our Gold medal success in Tokyo and I’m looking forward to Paris 2024. I would also like to thank my local community on Hayling Island for fantastic support they have given me. I am very proud of my Hayling Island roots and hope that more local people will support or take up sailing and watersports in the future given the fantastic facilities available locally.”