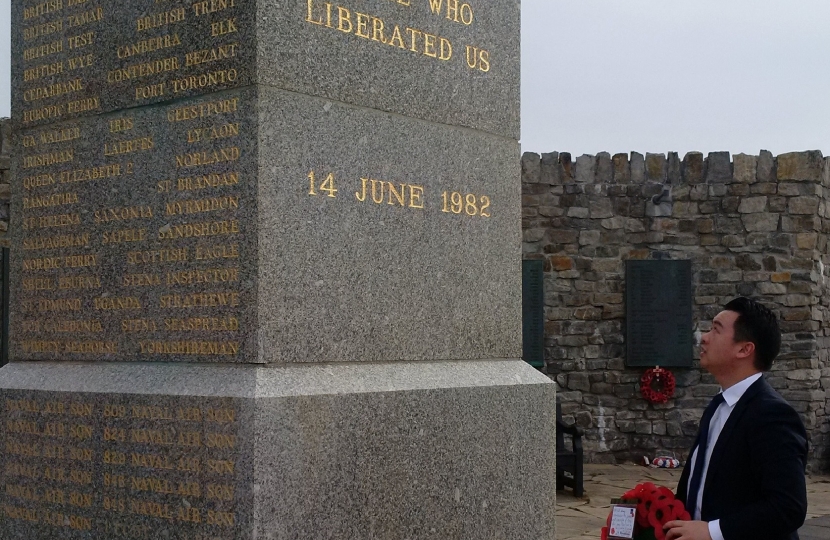 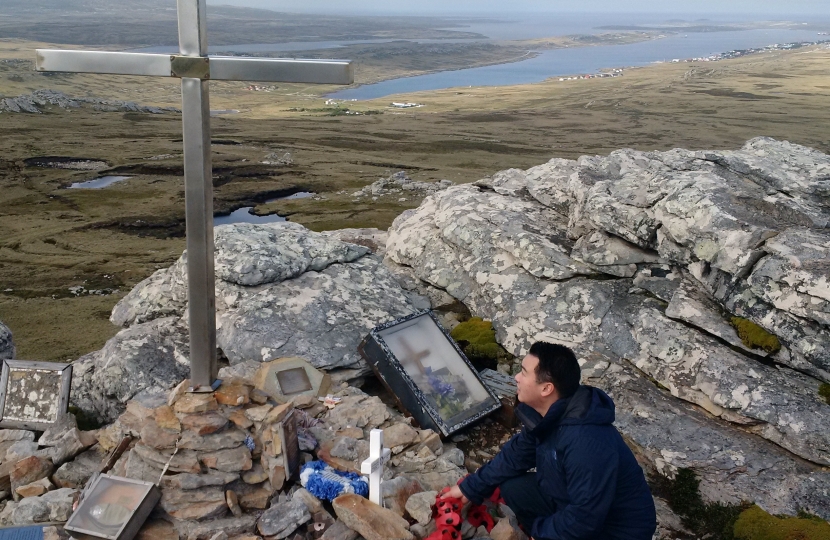 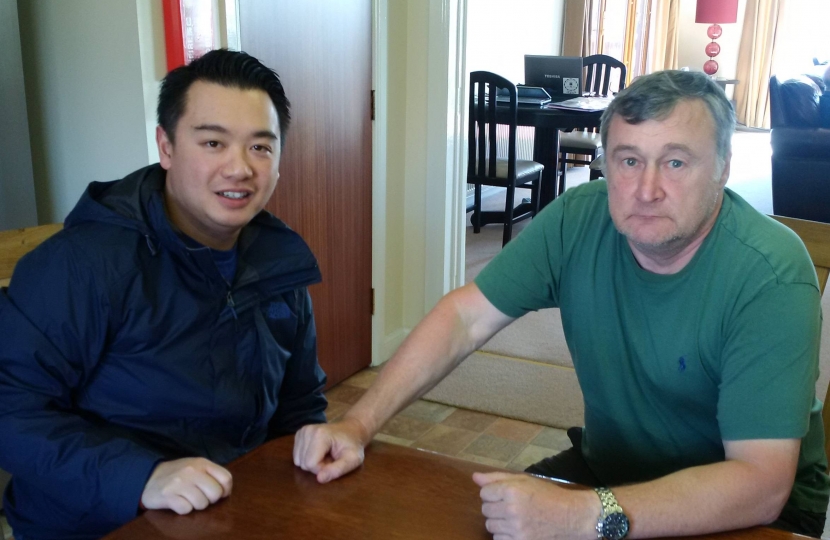 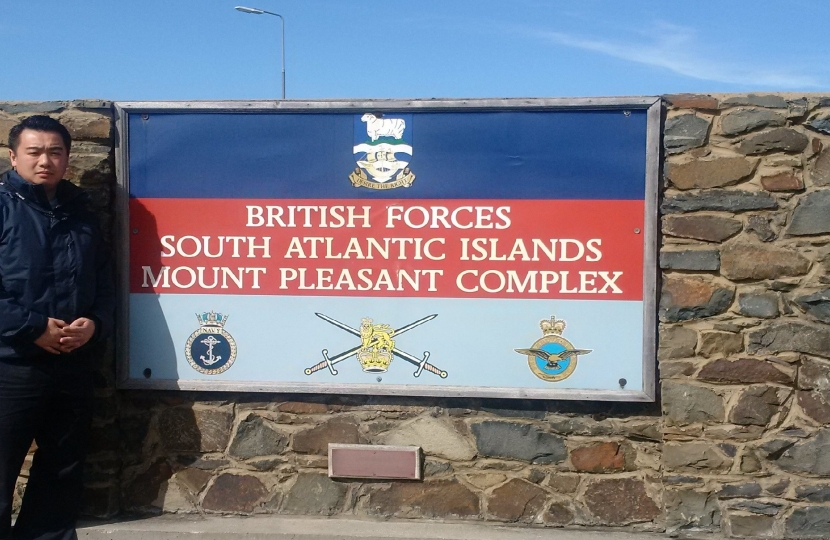 Local MP Alan Mak has made a 16,000-mile roundtrip from Havant to the Falkland Islands to honour British Forces veterans and current personnel as the 35th anniversary of the Falklands War approaches.

Mr Mak says the key moments were laying a wreath to the Fallen; meeting a Falklands War veteran from Havant, Sergeant Mark Gibbs; and visiting a site of one of the key battles, Mount Tumbledown.

Mr Mak laid a wreath at the Island’s Liberation Monument in Stanley, the capital, which commemorates the liberation of the Island after it was invaded by Argentinian forces in 1982. The MP’s message, attached to the wreath produced by the Royal British Legion specially for MPs, asks the British people to remember the service and sacrifice of those who gave their lives, including those from Havant.

Havant’s MP also visited Liberty Lodge, a residence on the Island for Falklands War veterans and their families, maintained by the Falklands Veterans Foundation. He met Mark Gibbs, a Royal Marine veteran from Leigh Park, Havant who was stationed on the Island on the day of the invasion in 1982, and later fought the Argentinians as part of the UK’s Taskforce that arrived from Britain.

Sergeant Gibbs was born in Havant and grew up in Leigh Park. He joined the Marines aged 17, and was 23 at the time of the invasion. He was awarded the South Atlantic Medal for his service in the Falklands. Some of his family members still live in Leigh Park, and Mr Gibbs said he was proud to have served his country. He later served in Northern Ireland, Cyprus, and the Gulf before working for the Civil Nuclear Constabulary, guarding power stations in Britain. He is now retired, and this was first visit back to the Falklands since the war.

Whilst in the Falklands, Mr Mak also visited the Mount Tumbledown battlefield, walking in the footsteps of British service personnel and spending time at the hilltop memorial to British forces killed in action.

He also met the British Governor of the Islands, members of the Island’s Defence Force, members of the Island’s Parliament (the Legislative Assembly), and visited British Forces stationed at the Mount Pleasant military base. The UK Government has deployed a substantial Tri-Service force (consisting of Royal Navy, Royal Air Force and Army personnel) to protect the Islands, and invests around £80M per year towards defending the Island. Mr Mak said he backed the Island’s continued sovereignty and right to self-determination as a British Overseas Territory, and the financial support that Britain gives to the Island.

Mr Mak is a Vice President of Havant Royal British Legion, and President and Founder of the Royal British Legion’s Young Professionals’ Branch. A strong supporter of the Armed Forces, Mr Mak said honouring the service and sacrifice of the 255 British personnel who died in 1982 was one of the most important tasks he has carried out since being elected in May 2015. He said many of those who served in the Falklands were of a similar age to him, including Royal Navy sailors and Royal Marines from the Havant area.

Mr Mak said he decided to make the visit after meeting several Falklands veterans from the Havant area, and was moved to hear that local men who died in the conflict are now honoured with plaques at Havant’s own War Memorial outside St Faith’s Church in the town centre.

He said, “Although the Falklands is thousands of miles away, I was determined to honour the service and sacrifice of British personnel who defended our territory and gave their lives in the name of freedom and security.”

He added, “Royal Navy sailors and Royal Marines like Mark Gibbs from Havant were sent to the Falklands to do their duty so it’s a real honour - and very humbling - to make the same journey 35 years later. As veterans retire and the fallen fade from memory, we must commemorate their bravery both locally and in the Falklands where they served with such distinction”.

Mr Mak continued, “Having spent a year with the Royal Navy on “work experience” alongside my MP duties, I know we have the most professional naval force and marines in the world. It was humbling to learn more about their service during the Falklands War, and to meet today’s servicemen who continue to protect the Islands. I fully support the Falkland Islanders right to self-determination and their decision to remain a British Overseas Territory.”

Travel time from RAF Brize Norton in Oxfordshire to Port Stanley was around 20 hours each way, including a refuelling stop on Ascension Island. Mr Mak said this is the longest flight he has ever taken, but said it was well worth it given the importance of the visit.

To support the Falklands Veterans Foundation, click this link: http://www.falklandsveterans.org.uk/donations.html