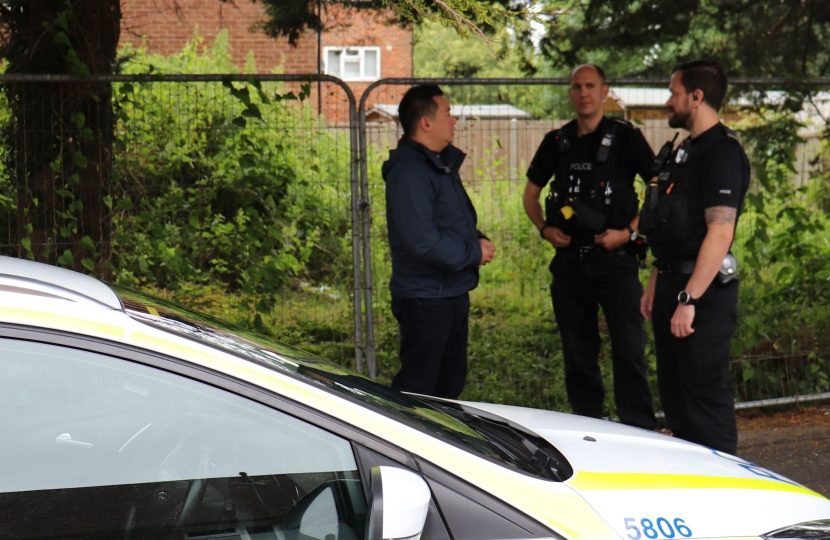 Local MP Alan Mak has spent a day on the frontline with local police officers seeing the work they do to keep residents safe.

The MP went out on patrol with response officers from Hampshire Police, who patrol the Havant constituency and attended incidents on Hayling Island and across Havant.

The day was part of a national campaign from the National Police Chiefs' Council that aims to get more politicians to meet with police and understand the challenges of being a frontline police officer.

Alan said: “My day on the frontline seeing first-hand the hard work and commitment of our excellent local police officers was very insightful and inspiring. We attended a range of call-outs, from domestic incidents to traffic problems and at every emergency response the officers displayed the utmost professionalism.

“Seeing up close their dedication to the job of keeping our community safe was of real benefit. Having already helped secure an extra £25m for Hampshire police, I’ll continue to lobby hard in Westminster to ensure that we can give the police the best possible resources.”

It comes after the new Prime Minister Boris Johnson announced there will be an extra 20,000 police officers hired, with the recruitment drive set to begin in September. The aim is to have all the new staff in place within three years.

Following the announcement, Alan wrote to the Home Secretary, making the case that Hampshire should receive a fair share of the new officers. If the 20,000 extra officers were divided equally between the 43 police forces in England and Wales, Hampshire would expect at least a further 450 more personnel added.

He added: “I was very pleased that the new Prime Minister made clear in his first speech on the steps of Downing Street that making our streets safer is a top priority. An extra 20,000 policemen and women will make a big difference in tackling crime. I’ll be working closely with colleagues and ministers to ensure that Hampshire gets a fair share of any new funding to hire additional police officers.”