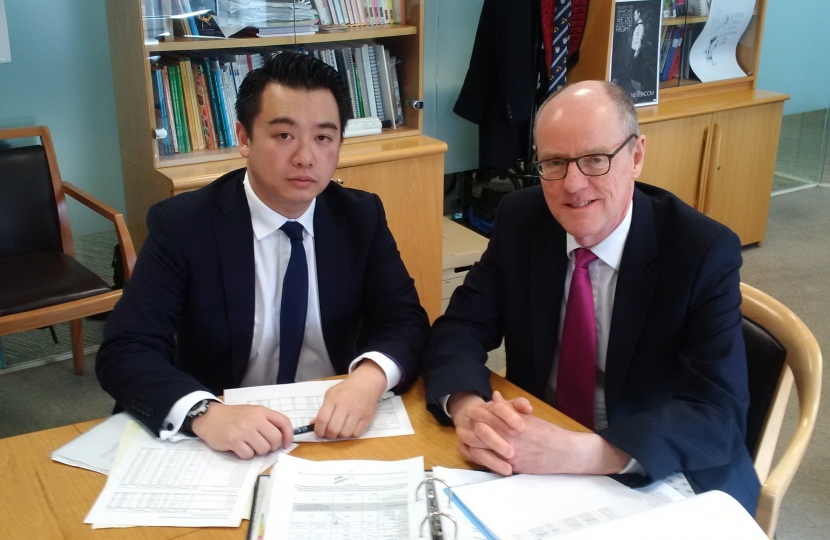 Havant MP Alan Mak has met the Schools Minister to set out his concerns about the possible implications of the Government’s new schools funding formula for local schools.

The Department for Education has produced a draft funding formula and has been seeking feedback since late 2016 with the public consultation closing last Wednesday 22 March 2017.

Although the funding formula is only in draft form and is likely to be amended before being finalised, draft indicative figures have been circulated which indicate possible reductions in funding for many Havant schools. Mr Mak said although nothing is finalised yet, he was still concerned by the direction of travel and has urged the Minister to change the funding formula.

During the Ministerial meeting, Mr Mak passed on the concerns of local schools and emphasised two key points. Firstly, the need for Hampshire County Council, the local education authority, to retain some role in distributing money to local schools so funds could be targeted at areas of deprivation across Hampshire, including in the Havant area. Secondly, Mr Mak said he preferred the current system for measuring deprivation which reflected Havant’s needs, rather than moving to a new measure which would not identify local deprivation as well.

Under the existing funding system, money is provided by the Education Department to local education authorities like Hampshire County Council who in turn distribute the funds locally using their own local formula to take account of local needs. The proposed new formula would end the role of county councils, with funds sent directly from Whitehall to schools, meaning local discretion at the county-level is removed.

However, the current funding system has itself been criticised for creating a “postcode lottery” in school funding – which meant, for example, that a school in one part of the country could receive over 50% more funding than an identical school in another area. To fix this disparity, the Government has published its draft funding proposals for consultation in an attempt to iron out regional and national inconsistencies.

Mr Mak said, “I agree with Hampshire County Council that these draft figures should be treated with caution. They’re not based on the final formula because nothing’s been set in stone, but they’re still concerning. That’s why I’ve lobbied the Schools Minister, the Education Secretary and the Chancellor to ensure local circumstances are considered when the final formula is produced later this year. I’ve also responded formally to the public consultation, and written to every school in my constituency urging them to do the same. I’ve been as an active supporter of local schools since being elected, and will continue to be a strong voice for them in Westminster.”

Mr Mak added, “I got the Schools Minister to visit Havant last autumn so during our recent meeting he was very understanding about the needs of local schools because I made sure he’d been here on the ground. The consultation has only just closed, I’ve made strong representations, so we await the Government’s response.”

Following the meeting Mr Mak said that the Schools Minister had reassured him no final decision had been made and that the Government will be taking into account all of the consultation responses from parents, teachers, governors and politicians.

Mr Gibb said: “Over the consultation period, we received representations from many schools, governors, local authorities, parents and MPs on the national funding formula, and it was good to hear Alan’s views on behalf of his constituents.”

Mr Gibb added, “School funding is at its highest level on record, and what is clear from these meetings is that there is a broad consensus on the need for a fairer funding formula to bring an end to what has, over time, become an outdated postcode lottery. We will now carefully consider the responses to make sure we get the formula right and to ensure that every pound we spend on education has the greatest impact.”

Mr Mak added, “I’ve also led a Hampshire-wide campaign to change the funding formula, mobilising other MPs in the county to get behind my proposals.” He is a Vice Chairman of the Hampshire All-Party Parliamentary Group (APPG), and the Group’s Lead MP for Education.

Since becoming MP in May 2015, Mr Mak has been a strong, active supporter of local schools and students, having previously served as a state primary school governor for more than five years and as the President & Trustee of an award-winning children’s school breakfast charity. He has also visited every secondary school and college in the constituency - some on numerous occasions - as well as nearly every primary school to talk to teachers and headteachers about the issues that matter most to them.

A copy of Alan's formal response to the public consultation on the funding formula can be downloaded below.