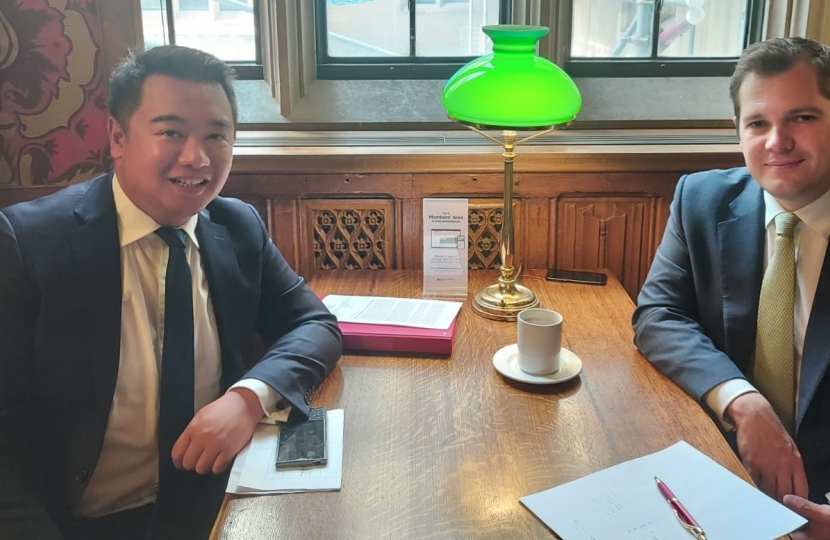 Following engagement with Havant Constituency residents and meetings in Westminster with the Secretary of State for Housing, Communities and Local Government and the Minister of State for Housing, local MP Alan Mak MP has submitted his response to the Government’s two recent consultations on proposed changes to the planning system. The consultations, "Changes to the Planning System" and "Planning for the Future" closed on the evenings of Thursday 1 October 2020 and Thursday 29 October 2020 respectively.

In his submissions Alan Mak MP recognised that the Government must deliver on its December 2019 General Election manifesto commitment to deliver more homes across the country and that it’s right that everyone, especially young people and growing families, has an opportunity to own their own home, not just live with their parents or rent indefinitely. However, Alan also strongly emphasised that this must be achieved in a way that takes account of local factors and constraints, including across the Havant Constituency.

Alan praised Havant Borough Council (HBC) who describe themselves as a “pro-development local authority” and recognised the hard work they have put into drafting their new Local Plan, which sets out their plans for housing, development and regeneration plans locally. Alan has worked closely with the Council’s Planning Policy Manager as he drafted his own consultation responses.

Alan said: “Young people, growing families and others across our constituency all deserve the opportunity to own their own home, and more housing is needed as demand grows but new local targets should take account of physical and environmental constraints. The first draft of the new standard method for calculating housing need is not appropriate for the Havant Constituency so I have submitted a robust but constructive response, and included ideas and suggestions for improvement. I have also submitted other suggestions for wider reform of the planning system.”

Alan believes that physical, geographical and environmental constraints in a local authority area must be taken into account in the new standard method for calculating housing need figures and play a key role in deciding (and lowering) housing need numbers.

In Westminster, Alan is an active founding member of a group of Conservative MPs that has a shared desire to reform and improve the first draft of the new standard method and shape the wider planning reforms.

You can read his submissions by downloading them at the bottom of this page, but a summary of the key points that Alan made in his consultation responses are:

In addition to his consultation responses, Alan has also sought to clarify the following points about the first draft of the new standard method:

Whilst the consultations’ responses are reviewed – and pending the finalisation and introduction of any new system for calculating housing needs – local planning authorities such as Havant Borough Council will continue to play their key role in the planning process and influencing housing targets that reflect realistic delivery, including by continuing to grant or decline planning permissions.

Any queries relating to local planning and development issues, including HBC’s new Local Plan and related projects, can and should be still addressed to HBC, including via local HBC councillors.

Photo: Alan Mak MP has met the Secretary of State for Housing, Communities and Local Government to set out his views

Local MP Alan Mak has welcomed the Government’s Budget announcement for a post-Brexit Solent Freeport which includes a key site in Leigh Park.