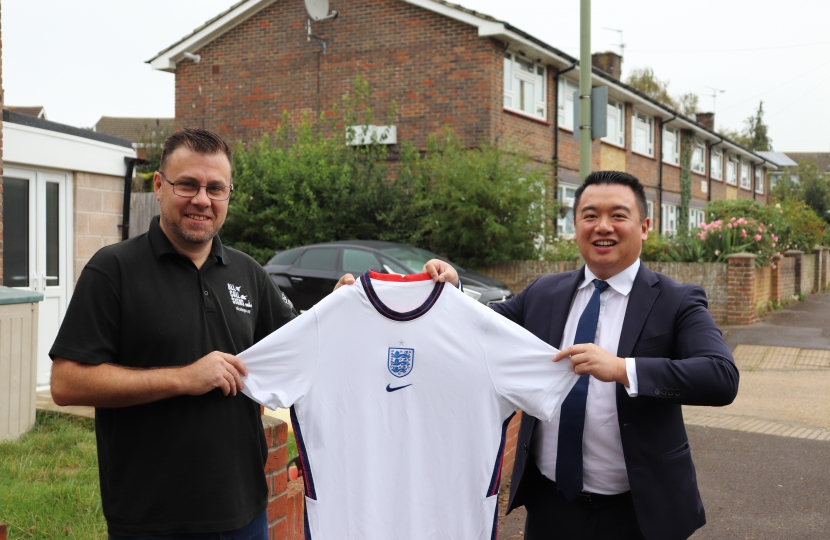 Local MP Alan Mak has donated an England football shirt to the winner of his Three Lions competition which ran through the summer, incentivising residents of Havant to get behind the England football team.

Martin Doe of Leigh Park won the competition organised and run by the local MP during the England team’s campaign over this summer.

Alan Mak MP said: “I am pleased to be giving away this shirt to Mr Doe. England had a fantastic tournament at Euro 2020, and I think their achievement is something we can all be proud of. This is just one fantastic accomplishment in a year of sporting success for Britons, with other notable sporting successes such as Emma Raducanu’s win at the U.S. Open, and Hayling Island’s very own Eilidh McIntyre who won Olympic gold in Tokyo.”

Mr Doe works for the gas company SGN, and worked throughout the pandemic to ensure that gas supplies were unhindered and supply chains were interrupted by the ongoing effects of lockdowns and disruption to international trade.

Martin Doe said: “I’m so happy to have won the competition and want to say thank you to Alan Mak for giving me this England shirt. I’ll definitely be making good use of it this time next year when England play for the World Cup in Qatar- it’s coming home!”