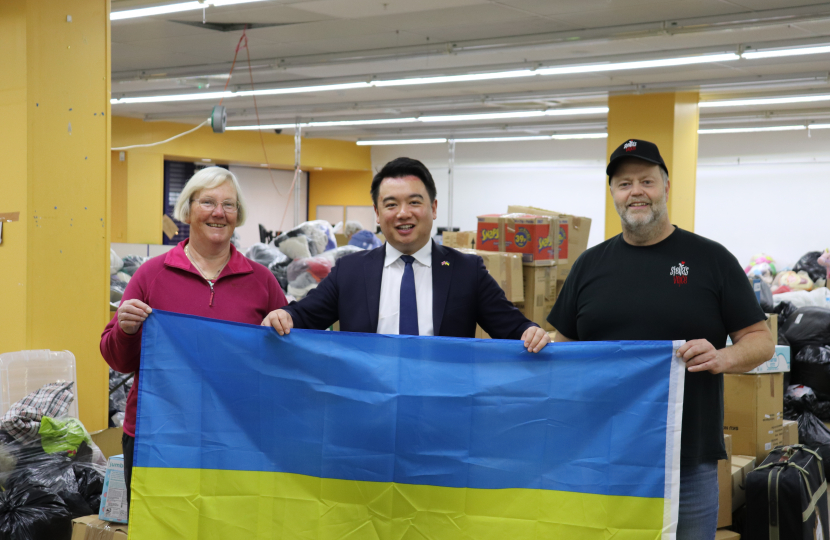 Local MP Alan Mak has visited the Meridian Centre in Havant to thank local charity Stella’s Voice for their work collecting goods donated by the community for Ukrainian refugees.

Stella’s Voice is a local charity working to prevent human trafficking and sex slavery. They currently operate 3 homes in Eastern Europe providing safe refuge to orphans who find themselves at heightened risk of being trafficked.

Local MP Alan Mak worked with Stella’s Voice to identify the site at the Meridian Centre as a base for their fundraising efforts for Ukraine, which has been operating well at short notice.

Mr Mak also visited the New Lane industrial estate to see collections that had already been stacked on pallets and shrink-wrapped, ready for loading onto HGVs by Stella’s Voice.

Now the charity is asking for donations of dried foods as the authorities at the Ukrainian border have asked that people stop donating clothing due to complications in offloading, categorising, and distributing these items.

Local MP Alan Mak said: “Thanks to Stella’s Voice for their great work collecting local donations for Ukrainians. The support of the community has been outstanding, and I hope local residents will continue to support Ukrainian refugees either by donating to Stella’s Voice or through the Government-backed Disasters Emergency Committee fundraising appeal.”

Wayne Keeping, Operations Director at Stella’s Voice said: “Thank you to Alan Mak for supporting us and helping us to find the Meridian Centre site which has acted as a base for our collections appeal. We now need donations of dried foods which will keep for the journey to the Ukrainian border. If anybody would like to donate, please drop off items at our collection point in the Meridian Centre.”

For additional information, residents can contact Stella’s Voice on 0300 111 0123