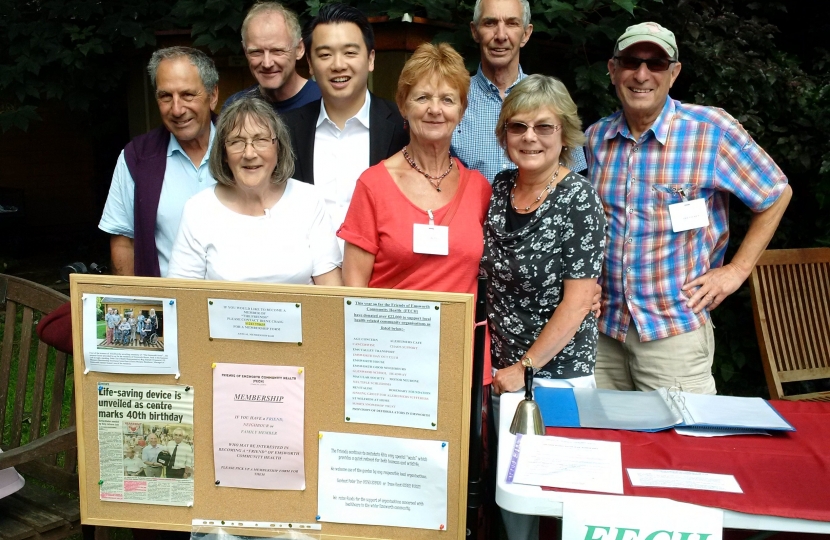 Local MP Alan Mak has praised the Friends of Emsworth Community Health (FECH) as he opened the charity’s summer fete this weekend. FECH own and maintain the garden next to the former  Emsworth Hospital, having previously raised funds to provide equipment and services which cannot be easily obtained from the National Health Service.

Mr Mak opened FECH’s annual Community Fete on Saturday June 25th 2016 in the Friends' garden adjacent to the Victoria Cottage Hospital in Emsworth. It was a feast of tea and delicious cakes as residents turned out in good number to peruse stalls selling everything from books to bric-a-brac.

Despite the formal closure of the hospital in 2013, FECH still tend to the garden beside the Victoria Cottage site and Mr Mak congratulated them on the ‘excellent work’ they do provide a link between residents and local healthcare services.

FECH have so far raised and donated over £22,000 to 20 local health related organisations. The group also have close links with nearby community initiatives such as the Emsworth Day Out Scheme, befriending club for older people with disabilities in the Havant and Emsworth area. Meeting every Wednesday at Hewitt’s for activities, lunch and a day out every other month, the scheme co-ordinates closely with FECH over issues such as transportation for elderly people.

In December 2015, FECH also hosted its first Christmas Fair, complete with Santa’s Grotto. The Southbourne Lions and FECH worked together to make this a truly memorable morning for all, with Santa’s Grotto, Carol Singers, Leo the Lion, hot food & drink plus various Christmas stalls around the garden. Plans are already being made for a repeat event in 2016.

Following the fete, Alan Mak said: “It was fantastic to open FECH’s Community Fete for the second year in a row. They’re a wonderful community organisation who are excellent stewards of Emsworth’s hospital garden so it can be used by everyone. I’m working on getting a new surgery for Emsworth and FECH play a key role working with me on that vital project.”

Mr Mak added: “The frontline of community care comes from residents themselves, and it’s great to see Emsworth locals coming along to show their support for FECH.”

Chair Irene Kent added: “Thanks to Alan Mak for coming back our fete. It is good to see our local MP supporting issues that are close to the hearts of Emsworth residents. It has been a successful and enjoyable morning and we are determined to continue raising funds to help some of the most vulnerable and deserving members of our local community.”