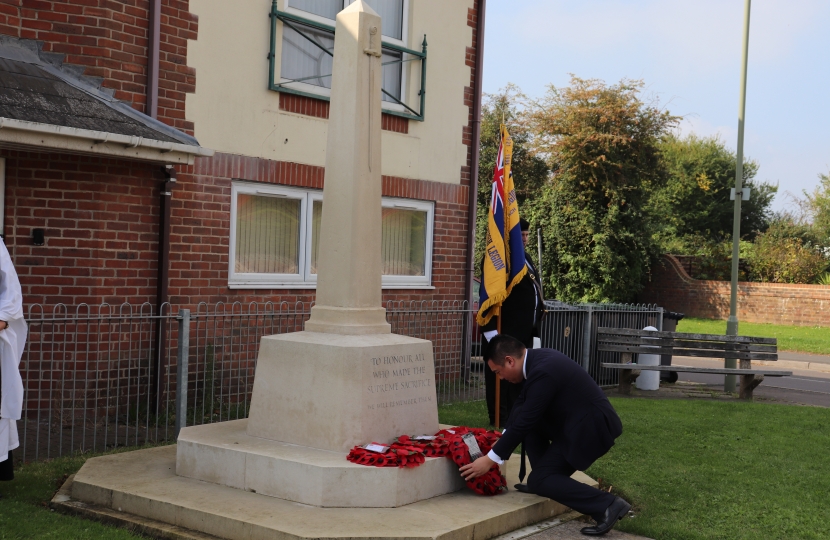 Members of the Hayling Island Royal British Legion invited Alan to lay a wreath to mark the centenary at the service, along with the Branch's senior representatives.

Alan said: “I was honoured to lay a wreath at the Hayling Island War Memorial to mark the centenary of the Island Branch’s foundation. The support and care that the Royal British Legion gives to our armed forces, military families and veterans is invaluable. I am proud of the courage and dedication of our Armed Forces and I will continue to support the Legion locally.”

Born in the aftermath of the First World War, the charity’s aims are to fight for the rights of Armed Service Personnel, and to care for those who have suffered as a result of service during conflict. Today, the RBL continues to stand with the Armed Forces community and fundraises throughout the year to achieve these aims, most notably during October and November with its Poppy Appeal.

The support on offer ranges from expert advice and guidance to recovery and rehabilitation, through to transitioning to civilian life.

The Hayling Island Branch of the RBL was formed in 1921.

Alan is a strong supporter of our Armed Forces and veterans in Parliament, and has been successfully campaigning alongside the charity to include an Armed Forces question in this year’s census.

The Budget announced earlier this year included more support for our veterans, including an additional £10 million in the Armed Forces Covenant Fund.