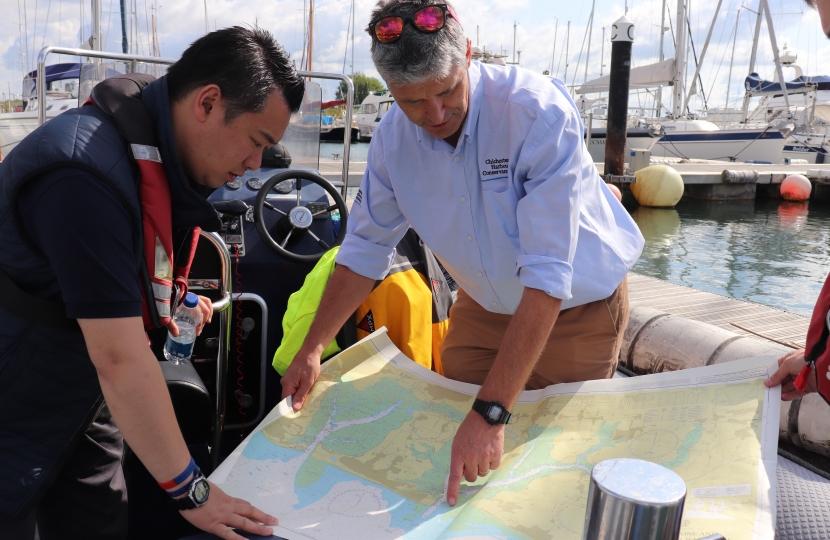 Local MP Alan Mak has launched a new Forum alongside other MPs from Hampshire, West Sussex and the Isle of Wight to drive improvements in water quality in Langstone and Chichester Harbours and the wider Solent region.

These provide unique habitats for plants and wildlife, as well as being used extensively by water sports enthusiasts.

The MPs brought together local community representatives and officials from the Environment Agency and local government with Southern Water’s Chief Executive to discuss the water company’s plans to phase out storm water releases and improve local water quality in Langstone and Chichester Harbours and the wider Solent region. The Forum also heard from Environment Minister, Rebecca Pow, who set out the steps the Government is already taking, such as implementing a legal phase out of storm water releases, mandating improvements in the water efficiency of homes and requiring housebuilders to mitigate the effects of new developments.

Another live issue was the release of stormwater into Langstone and Chichester Harbours by Southern Water. During and after periods of heavy rainfall, their systems can release releases into local harbours causing concerns for the health of harbour users and the environment. MPs called on Southern Water to set out their plan to phase out releases to comply with the new legal obligations set out in the new Environment Act.

Southern Water’s CEO Ian McAuley said he was committed to reducing the frequency of releases, and pointed to their current work with Natural England and universities to build a new digital ‘baseline’ assessment system, expected to be up and running within a year.

The new baseline assessment tool will be key to accurately identifying the sources of pollution within the harbours, providing the partnership the ability to implement targeted solutions and track the impacts accordingly, to tackle the issue of pollution and protect these precious natural habitats.

Studies are also underway to improve drainage through nature-based solutions.

Speaking at the Forum, Mr McAulay said: “The systems we have in place today are not the systems we need to get to where we want to be tomorrow, for the benefit of our customers and the environment. You have my full support and I really like the fact that people are talking about water quality.”

Mr Mak said: ‘I’ve been working on this issue for several years, and having proposed the creation of the Forum I’m pleased Southern Water are taking this issue seriously and working constructively to improve the health of our harbours and the wider Solent. However, the Forum’s MPs recognise there’s more work to do and we are working together to continue pressing Southern Water to improve water quality in our region”.

The MPs plan to follow up with another meeting of the new Forum this autumn, to track progress and press for further action.