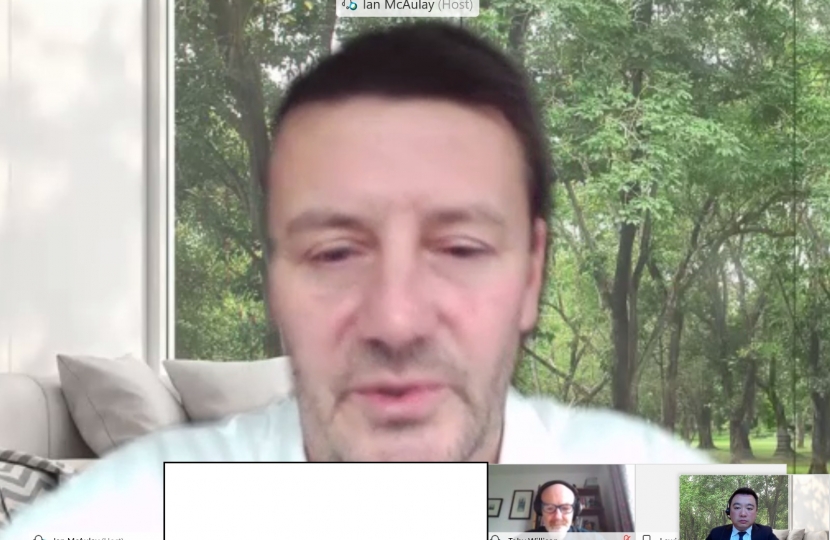 At the meeting, Southern Water has reaffirmed its commitment to meeting new Government targets to improve water quality following the meeting held with Mr Mak.

The Government’s Storm Overflows Taskforce – made up of Defra, the Environment Agency, Ofwat, Consumer Council for Water, Blueprint for Water and Water UK – has set a long-term goal of eliminating discharges from storm overflows. The same group has also recently been instrumental in introducing a framework for the creation of integrated Drainage and Wastewater Management Plans which are currently being developed.

Havant Constituency MP Mr Mak has played a leading role in the national campaign to improve our coastal harbours and bathing waters. As part of those efforts, he’s launching a regional forum bring together other MPs, councils and community groups from across our region to with Southern Water to improve local water quality.

This new forum will build on the work already achieved by Mr Mak’s Hayling Island Environment Forum over the last two years, where Southern Water has shared the improvements it has made with its voluntary Beachbuoy spill notification system.

During the meeting with Mr Mak on February 18th, Southern Water CEO Ian McAulay outlined what he described as the “holistic, cross sectoral approaches needed to enhance the health of bathing waters, rivers and water quality in harbours”.

Stormwater releases are designed to prevent homes and properties from flooding during periods of very heavy rainfall when the capacity of the system can be exceeded.  However, a combination of climate change bringing significantly more periods of intense rainfall, alongside more surface water entering into combined sewer systems, has meant increasing use of these overflows, especially during the winter months. Southern Water say that The Task Force had been advised that it would take up to 25 years and around £100Bn of investment to phase out storm overflows entirely and ensure that wastewater sewage is separated from rainwater.

On the call with Mr Mak, Southern Water confirmed it will share the relevant key work and improvements it is making as part of its business plan. This includes reducing the amount of surface water from getting into and overloading sewer pipes, especially during times of heavy rainfall. It will also highlight the key areas where there are opportunities for more joined up approaches such as in the introduction of Drainage Management Plans.

Mr Mak said: “Having campaigned on this issue for several years, I’m keeping up the pressure on Southern Water to reduce discharges and produce a new plan explaining how they will meet the Government’s new targets. My meeting with Southern Water’s Chief Executive was encouraging and I am pleased that they have agreed to both publish a plan and also take part in a new stakeholder forum I am creating to tackle stormwater discharges into Langstone and Chichester Harbour”.

“There is more work to be done and it remains a long-term goal to ensure that we reduce the reliance on combined sewer overflows. I look forward to seeing Southern Water’s plan to tackle this very important issue.”

Southern Water CEO Ian McAulay said: “We welcome the Taskforce’s overall goal to eliminate stormwater releases. This is a matter that needs to be looked at holistically, with authorities and key organisations working collaboratively to drive the change we all want.

“It is not a problem that is going to be resolved overnight. It will need many parties working together to make the biggest amount of progress in the shortest period of time. We look forward to a clear pathway being established via the taskforce, and progressive change in legislation and governance driving ever higher standards.

“With all that in mind, we’re delighted to be part of the regional stakeholders group being launched by Alan Mak MP, working together to help improve water quality, and ensure a resilient water future for all.”