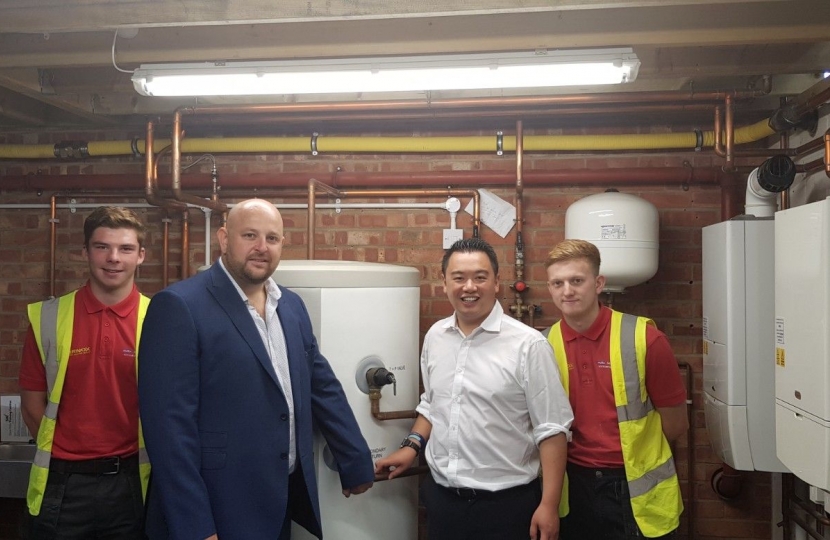 Havant MP Alan Mak has joined two local apprentices at their training centre to see their work first hand, as figure show the area as a national leader in new apprenticeship starts.

Mr Mak met Gary Robinson, Managing Director of Havant-based heating company Aura Gas, and two gas apprentices currently training at the Steve Willis Centre where they spend a day a week learning about the trade alongside working the rest of the week.

He watched a gas training class in action as the new recruits serviced boilers, and spoke to local apprentices Billy Simmonds, 17, and Frankie Small, 20, both from Leigh Park, Havant. They told the MP about why they chose to start their careers in the gas industry with an apprenticeship, and how they are enjoying their training. Both youngsters left school at 16 and decided the ability to learn and earn whilst gaining valuable on-the-job training was a better route than going to university.

The Government has set a target of three million more apprenticeships by 2020, with Alan keen to find out how they are helping people locally. In the Havant parliamentary constituency, last year just under 900 people started apprenticeships, placing it strongly against national competitors.

Alan Mak MP said: “Our area as a proud tradition of engineering excellence and I’m delighted a new generation of apprentices like Billy and Frankie are strengthening our reputation as a national centre of excellence. A strong local economy is my top priority and having organised three Jobs, Apprenticeships and Careers Fairs, it was great to meet local success stories like Aura Gas who are committed to helping young people build their careers”.

“Nationally, I’m committed to boosting apprenticeships, as they give young people the opportunity to learn a valuable skill while earning at the same time, and raise the productivity of businesses. Our apprentices are the future of our economy – and we must all get behind them if we want a bright future for our area.”

Alan Mak MP has organised three organised three Jobs, Apprenticeships and Careers Fairs attended by over 2000 people on each occasion, backed by the News. He will host his fourth in early 2019. Any business interested in exhibiting should contact him via alan.mak.mp@parliament.uk