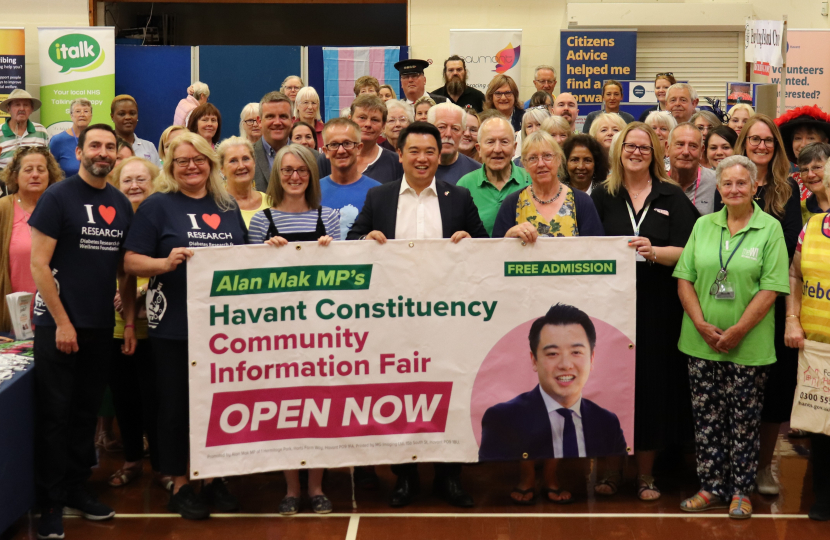 The Fair was well attended with over 30 exhibitors including local organisations, community groups, public sector workers and local businesses attending alongside hundreds of members of the public.

Alan Mak MP has hosted the Community Information Fair for 7 years since he was first elected as the Member of Parliament for Havant.

It is one of three fairs that he hosts in the Havant Constituency, along with the Jobs, Apprenticeships and Careers Fair and the Health and Wellbeing Fair.

Local MP Alan Mak said: “It’s great to be back on Hayling Island hosting my 7th annual Community Information Fair. It was great to see so many exhibitors and members of the public return after the COVID pandemic. Thank you to everyone who came for making my Fair a great success!”

Julia Robinson of Hayling Island Choir said: “Thank you to Alan for inviting us to the Fair! We’ve been able to speak to lots of residents about the Choir and have had interesting people come to join us. We’re really grateful for the chance to exhibit!”

Angharad Pike, Chair of Hayling Island Horticultural Society said: “The Fair is a great chance to engage with community stakeholders and see what’s going on around Hayling Island. We have had lots of interest today from the public. Thanks to Alan for organising the Fair”.