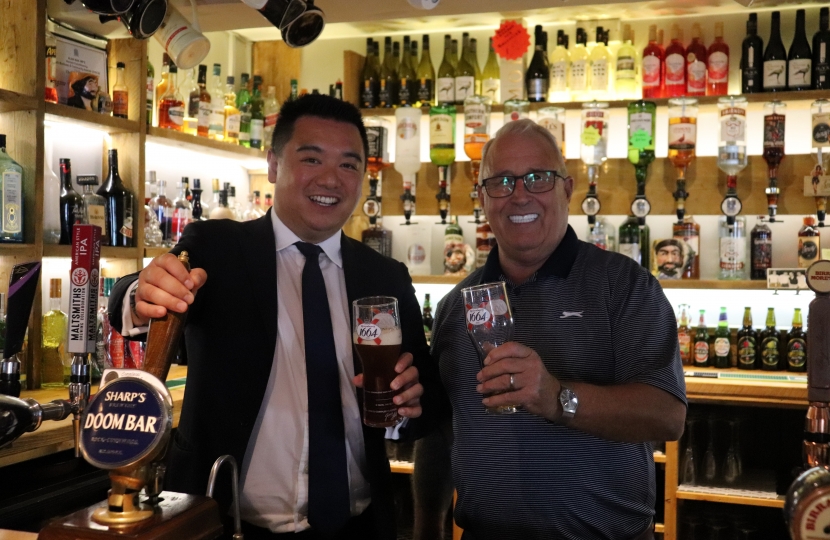 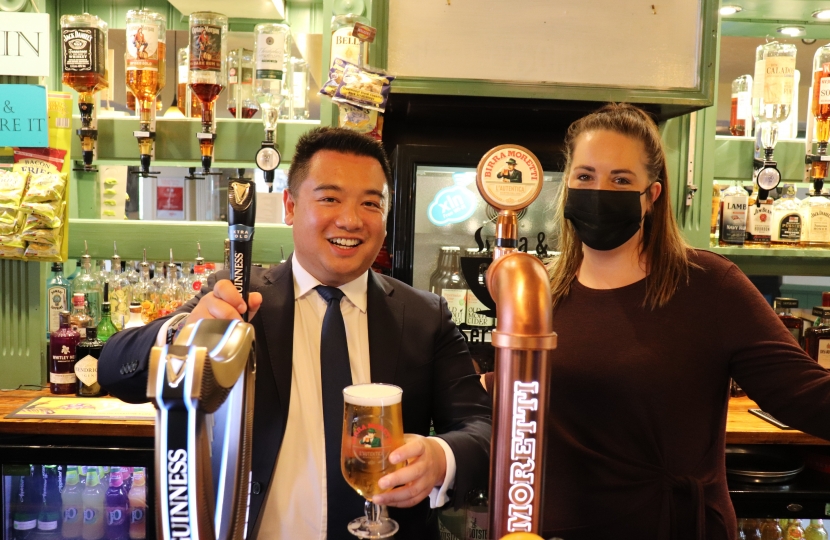 Local MP Alan Mak has visited two local pubs to see first-hand how they are bouncing back from the Covid-19 pandemic. At the pandemic’s height pubs found themselves unable to open, with some fearing they may close for good. However, thanks to the success of the NHS vaccination programme and the Government’s financial support package given to the hospitality sector, their doors are open once again.

Visiting The Centurion in Widley, Waterlooville, Mr Mak met with publican Maria Arnett who talked about the work she was doing to bring a new generation into the local, including cocktails and live music.  When the pub re-opened she introduced entertainment to broaden its appeal and spent the lockdown upgrading the exterior décor including adding decking at the front and reconfiguring the interior to make the pub more family friendly.

Mr Mak also visited the Golden Lion in Bedhampton, where he discussed trading conditions with long time publican Adrian Sines, as well as seeing the outdoor seating Adrian has built himself to boost the pub’s capacity for socially distanced seating. The Golden Lion is a family pub with an in-house Indian restaurant, where the last 16 months have been focussed on helping others and using the remaining time to improve the pub. Mr Sines has installed a new bar and remodelled the interior.

Mr Mak said: “Local pubs like the Golden Lion and the Centurion play a key role in our communities. I welcome the financial support the Government has provided to our pubs during this challenging time, and I’m delighted that they are re-opening, with publicans like Maria and Adrian having used the time to upgrade their facilities.”

He added: “Pubs are more than places to go for a drink, they are the beating hearts of their communities so it is encouraging to see how resilient and adaptable licensees like Maria and Adrian have been during tough times.  If we want our pubs to survive in the long term, communities need to support them”

Golden Lion publican, Adrian Sines, said: “We would not have survived without the support we received from the Government, it’s as simple as that. I took on a Bounce Back loan to fund changes to the pub. This week is my seventh anniversary at The Golden Lion, and I’ve just signed another 10-year lease. I am always looking to improve our offer to entice people out from their homes. The next step is to expand garden area and install a pool table”

Maria Arnett said: “It’s been a challenging year. There have been highlights like playing music during the Clap for Carers which created a real sense of community and the Euros which attracted a younger crowd. I’m looking forward to a major refurbishment next year and before that starting to host some charity fundraising events again. People around here are fantastic at getting behind charities and raising money.”