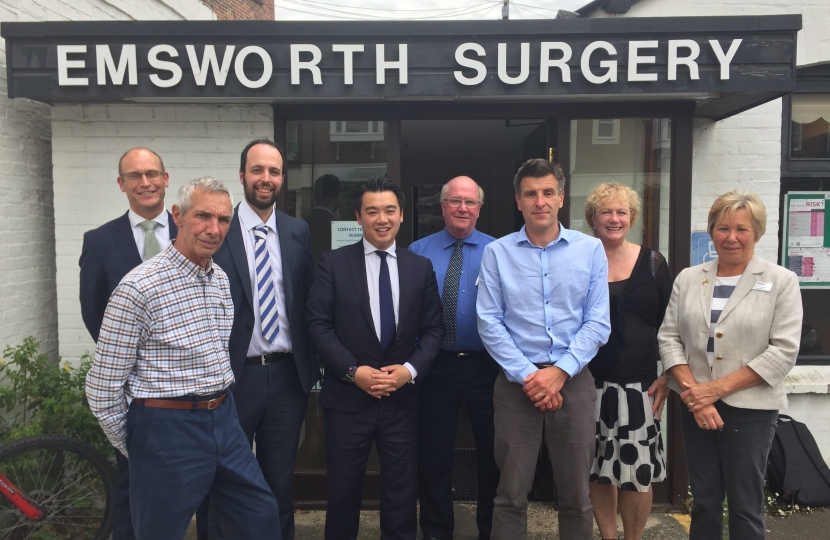 Havant and Emsworth MP Alan Mak has described his recent meeting to push for a new Emsworth surgery as “very positive”. Mak said a number of key steps have now been completed and the process has moved forward since 2015, but there was more work to do.

Emsworth Surgery have been looking to move to new and larger premises at the old Victoria Cottage Hospital site for over a decade, but the move has encountered several difficulties which Mak has been working to unblock since his election in May 2015.

Alan Mak MP convened a meeting on Friday 8 July 2016 which brought together the surgery’s doctors, NHS bodies, councillors from Havant Borough Council and a firm of surveyors to move the process forward and to provide Alan with an update on the situation. This is the latest in a series of high-level meetings organised by Mak who has taken the lead in getting the process moving again since May 2015.

Mak said the Emsworth Surgery move issue is complicated because a large number of organisations are involved including 3 NHS bodies – NHS England, NHS Property Services and South Eastern Hampshire Clinical Commissioning Group – as well as the current doctors’ surgery. Additionally, a wide range of complex issues also need to be considered and agreed, ranging from finalising the building design to financial details.

Key points and areas of progress identified at the 8 July meeting include:

·         South Eastern Hampshire NHS Clinical Commissioning Group (CCG), whose role in the NHS is to commission healthcare services, have prioritised a new surgery building for Emsworth, so reinforcing their support for the project

·         The CCG have submitted a bid to NHS England (the national NHS body), for £4.4m to fund the capital costs of building one. Alan Mak MP is backing this bid, and will lobby NHS England to make the funding available. This is a crucial step forward.

·         The surveyor acting on behalf of the surgery’s doctors has given the green light to the outline design of a new surgery building, set to comprise a two-storey detached medical centre with an attached pharmacy. Feasibility studies in relation to the proposed building and wider site are due for completion by the end of August 2016. All parties have agreed that the building will focus on functioning as a surgery and pharmacy only, and there will not be extraneous facilities such as a gym, library or community room.

·         All parties have agreed that the current draft surgery design is as “future proof” as possible, within the design and budget constraints, and should be able to deal with Emsworth’s projected population growth.

A key remaining hurdle is for the surgery’s doctors and NHS Property Services, an NHS body that manages land and buildings for the NHS, to agree rents and service charge levels to cover services such as building maintenance, cleaning and security. Discussions are ongoing, and Mak will convene another meeting in late September 2016 to review progress.

Separately, Mak met Lord Prior, the Health Minister with responsibility for NHS Property Services, in Westminster on 18 July to brief him on the Emsworth Surgery project so that it is firmly on the Department of Health’s agenda nationally. Mak will meet Lord Prior again in October to review progress.

Alan Mak MP said, “With a bid for capital funding now submitted and an agreement on the building’s broad design principles, we are making good progress, and our latest meeting was very positive. There is more work to do, including agreeing a range of financial details, but everyone is playing their part and working hard. I want to thank the surgery’s doctors, the NHS bodies and our councillors. There’s still much work to do, but we are continuing to move forward. I will continue to lead the campaign for a new Emsworth surgery, and look forward to making more progress in the months ahead.”

Colin Mackey, councillor for Emsworth on Havant Borough Council said, “All three Emsworth Borough Councillors attended Alan’s meeting, and we’re pleased the process is moving forward. Residents have waited patiently for years for a new surgery as it’s clear the current building is not suitable for a growing patient list. We’ll continue to support Alan’s excellent work on this key local issue.”

Dr Nick Woodruff, who represented the Emsworth Surgery’s doctors at the meeting said, “We covered a lot of ground during Alan’s meeting, and the process is now moving forward. We’re working hard with the NHS on our plans for a new surgery, and welcome Alan’s leadership and efforts.”