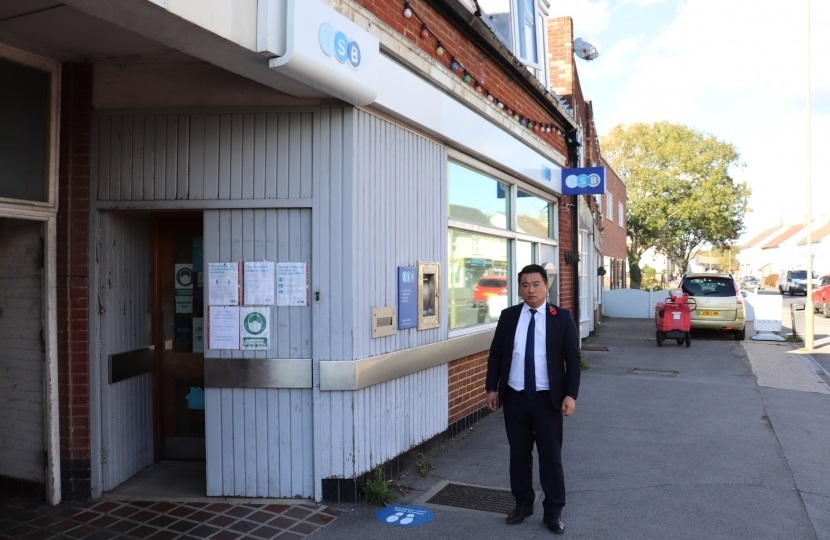 Local MP Alan Mak has described the proposed closure of Hayling Island’s TSB branch as "very disappointing news" and has taken immediate action calling on the bank to review and reverse their decision.

As Hayling Island’s last permanent bank branch, Alan Mak has expressed concern that the closure plan was not subject to consultation with local residents and customers. Alan is also concerned about the impact of the closure on elderly and vulnerable residents. TSB is planning to close hundreds of branches across the UK including in Winchester and Petersfield.

In a letter to TSB Chief Executive Debbie Crosbie he has asked the bank to justify its decision, and  asked them to meet him to discuss the matter further.

Alan Mak MP said: "I’m very disappointed to hear about TSB’s decision to close their Hayling Branch in June 2021. Local people and customers were not consulted in advance of TSB’s decision. On hearing the news I immediately wrote to TSB’s Chief Executive asking her to reverse the decision. It’s vital that all customers, wherever they live, have access to over-the-counter services, and I hope TSB will continue to offer those services to Islanders in some form. I understand TSB are closing hundreds of branches across the UK including in Winchester and Petersfield, but I hope they will retain their service on Hayling in some form.”

Visit www.alanmak.org.uk/TSBClosure to read Alan's letter to TSB and for further updates.