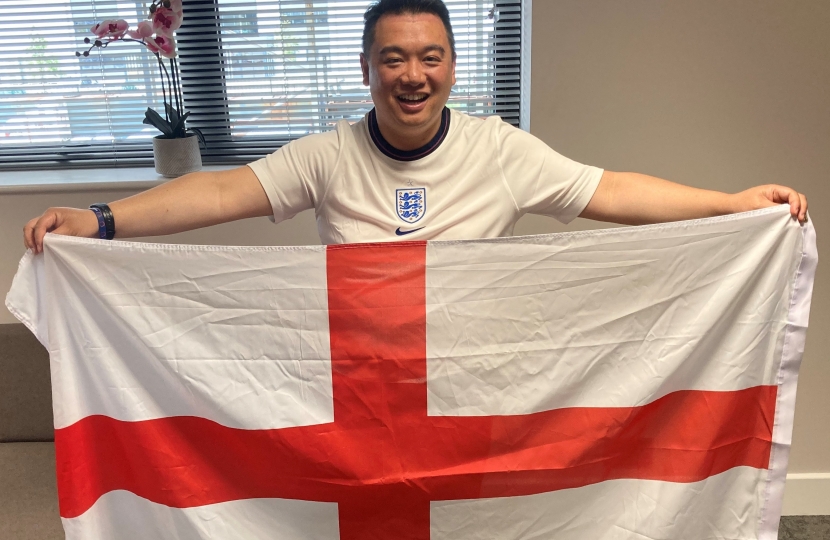 Local MP Alan Mak is calling on football fans to show their pride in the country by flying the flag for Euro 2020.

As part of his ongoing Fly the Flag campaign, Mr Mak is giving away free St George's flags to residents living in the constituency for the duration of the tournament.

It follows England’s solid start to the tournament with victory against Croatia followed by a draw on Friday against Scotland. Gareth Southgate’s team will now play the Czech Republic on Tuesday with a draw securing a place in the last 16 of the tournament.

Mr Mak hopes by flying the flag we can show our support for the Three Lions and also for Chelsea midfielder Mason Mount who grew up in Havant and attended Purbrook Park School.

He said: “Like everyone, I’ll be cheering on the Three Lions in the coming weeks, and I hope that Gareth Southgate and the team can progress into the later stages of the tournament. I want us all to show our pride in the country and team by flying the flag. I look forward to seeing them flying from houses, workplaces and flagpoles around the constituency.”

In order to request a flag residents should visit www.alanmak.org.uk/Flag

The flag will be sent free, including free postage, to residents living in the Havant Constituency by request and is on a first-come first-served basis. There is a maximum limit of one flag per household.