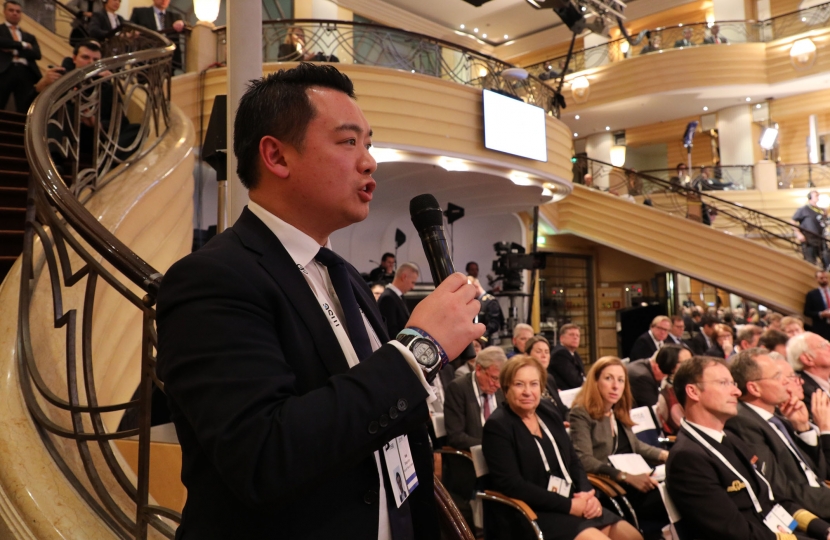 Local MP Alan Mak has praised Havant’s contribution to our national defence whilst representing the UK at a prestigious international security conference that brings together world leaders from NATO members and the organisation’s allies.

The Munich Security Conference, which has been held every year since 1963, provides a forum for Western allies to discuss mutual defence policy.

At the conference, which Alan attended as one of a small number of British delegates, strongly argued for a united NATO post-Brexit and the importance of Britain’s new Portsmouth-based aircraft carrier HMS Queen Elizabeth as the new centre-piece of our foreign policy.

The Havant MP was attending as part of the Munich Young Leaders programme, a joint project of the Körber Foundation and the Munich Security Conference. The project brings together 25 outstanding young representatives of governments, parliaments, think tanks, media and industry to give the next generation of defence and foreign policy leaders the opportunity to participate in important political debates and introduce fresh ideas on the international scene.

Among the Munich Young Leaders alumni are current and former ministers, members of parliaments, editors-in-chief, CEOs, and commanding officers.

Ahead of the Conference, Alan wrote in the national German newspaper Frankfurter Allgemeine Zeitung that Britain remains “committed to maintaining peace across the European continent” after Brexit. He argued that European nations should not use Britain leaving the EU to promote a rival European Defence Union, which has been floated by European Commission President Jean-Claude Juncker.

Alan said: “I was honoured to be chosen as a Young Leader for the Munich Security Conference, and contribute to the debate about European and NATO defence policy. I firmly believe in NATO, and the unwavering guarantee it gives to our security.

“I look forward to completion of the carrier project, following the contribution of Havant residents to the project at local firms Long and Marshall, Lockheed Martin and Wärtsilä. Our carriers are key to the future of the Royal Navy and an integral part of our NATO defence strategy. The hard work of Havant residents, combined with the dedication local servicemen and women will ensure that British values can be protected around the globe.”