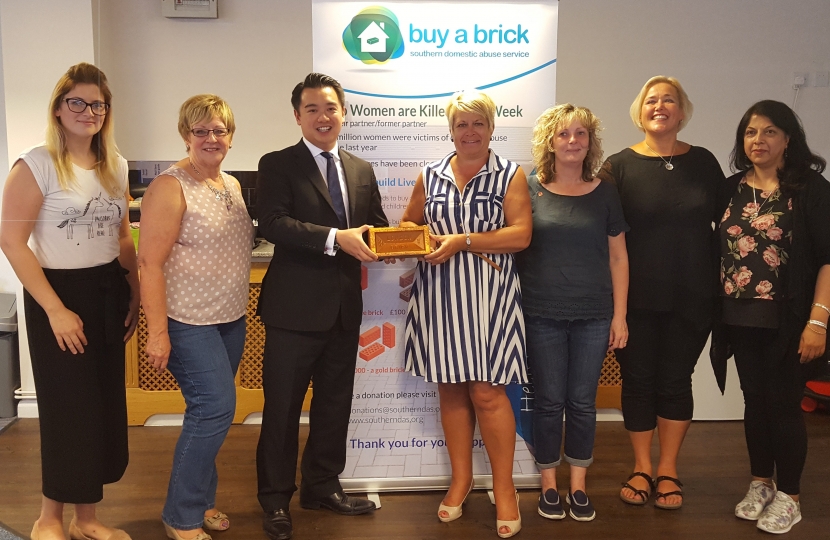 A senior Justice Minister has praised a Havant charity which supports victims of domestic abuse following a question by local MP Alan Mak in the House of Commons.

Mr Mak had asked Sir Oliver Heald, the Minister for Courts and Justice, about planned changes by the Government to make it easier for victims of domestic violence to access legal aid. These changes include removing the time limit on all forms of evidence and accepting evidence from domestic violence support organisations.

In his answer Sir Oliver praised the work done on the issue by domestic abuse charities such as the Southern Domestic Abuse Service (SDAS) based in Havant.

He said: “I am happy to pay tribute to organisations that help victims of domestic violence on their work, and I know from talking to my hon. Friend [Alan Mak], who is a strong advocate for SDAS, that that service in Havant is excellent.”

Mr Mak has been a strong supporter of SDAS and last year ‘bought a brick’ to help them raise funds to build a specialist safe house in South Hampshire. He also successfully lobbied in Westminster for a £190,000 grant to the charity from the Tampon Tax fund.

He said: “SDAS is a fantastic local charity and I’m delighted that it has been recognised in Westminster for the important role it plays in supporting the victims of domestic abuse. I will continue to support them in their goal of building a specialist safe house in South Hampshire, and I urge all residents who have not yet done so to ‘buy a brick’ to support the campaign.”

To buy a virtual brick and support the safe house campaign visit www.southerndas.org. Bronze, silver and gold coloured bricks can be ‘bought’ in return for donations of £25, £100 or £1000 and dedications and messages can also be added to the larger value bricks.

Claire Lambon, CEO of SDAS, said: “We were very pleased to be mentioned in Parliament by the Minister and we thank Alan for his continuing support of SDAS both locally and at a national level.  We have been thrilled with the local support for our “Buy a Brick” Campaign to raise funds to purchase our own refuge to ensure that victims and survivors of domestic abuse are able to access specialist services when they are needed.  We still have a long way to go to realise our dream and need our local communities to continue to support this vital campaign.”