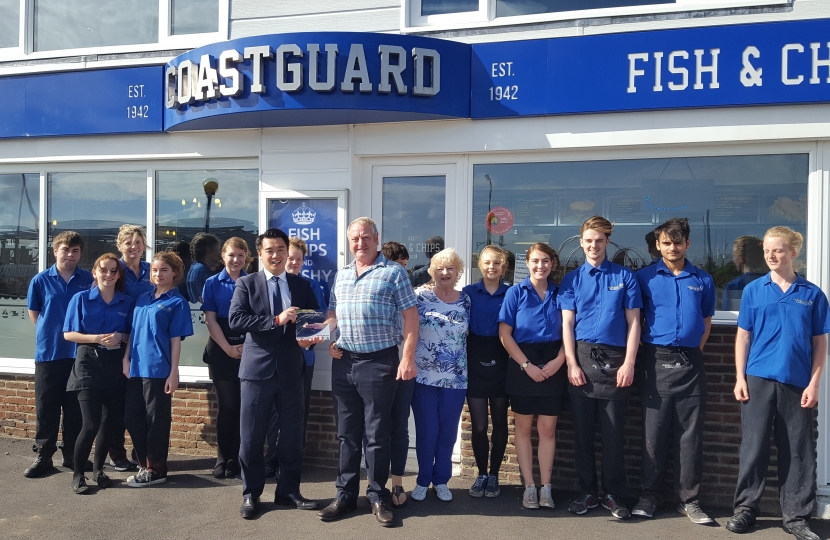 Havant and Hayling MP Alan Mak has called for more Government support for islands across the UK including Hayling Island in his constituency. He made the call as he led the first ever Westminster debate examining the strengths and weaknesses of island economies. He is a founding member of the All Party Group for UK Islands, and has successfully pressed the Government to launch and expand a new Coastal Communities Fund to back island and seaside economies.

He also set out the strategic challenges to be addressed including the overexposure of the local businesses and residents to closures of services like bank branches, the need to create employment opportunities for young people, and the need for stronger infrastructure as new homes are built. He also backed work on a new business plan for the Hayling Ferry to make it commercially-viable in the long-term.

Alan Mak MP said: “Hayling is a special place to live, work and visit, and I’ve been championing the Island since being first elected. I was proud to organise the first ever Westminster debate to highlight Hayling’s strengths particularly its strong economy, but also ensure its challenges are not forgotten either. I’ve called on the central and local government to keep supporting Hayling and other islands. I’m delighted the Treasury has responded positively with new funds, and I encourage our local councils and other groups to ensure they apply so we get our fair share.

“We’re all Islanders and we all must work together to ensure that all the islands around the UK, large or small, have a bright economic future."

Alongside other MPs from across the UK and from various political parties, such as fellow Hampshire member Bob Seely MP (Isle of Wight) and the Rt Hon Alistair Carmichael MP (Orkney and Shetland), Alan emphasised the need for Government recognition of the unique strengths and particular challenges associated with Island geography.

Responding on behalf of the Government, Robert Jenrick MP, the Exchequer Secretary to the Treasury stated “I would like to work with… my honourable friend from Havant [Alan Mak MP] to ensure the next iteration of the [Coastal Communities] fund takes forward those views and works for coastal communities.”

Mr Jenrick added that “Hayling Island sounds like a wonderful place, I’d love to visit the bookshop, the ferry, and on a day like today I’m sure we’d all like to be on an island like Hayling.”

Since 2012, the Coastal Communities Fund has invested £174 million into 295 projects UK-wide.

A further £40 million has been released by the Treasury for spend from April 2019 to end of March 2021 with further allocations of money expected in the future too.

Local councils such as Havant Borough Council and Hampshire County Council can apply for the funds for their areas.