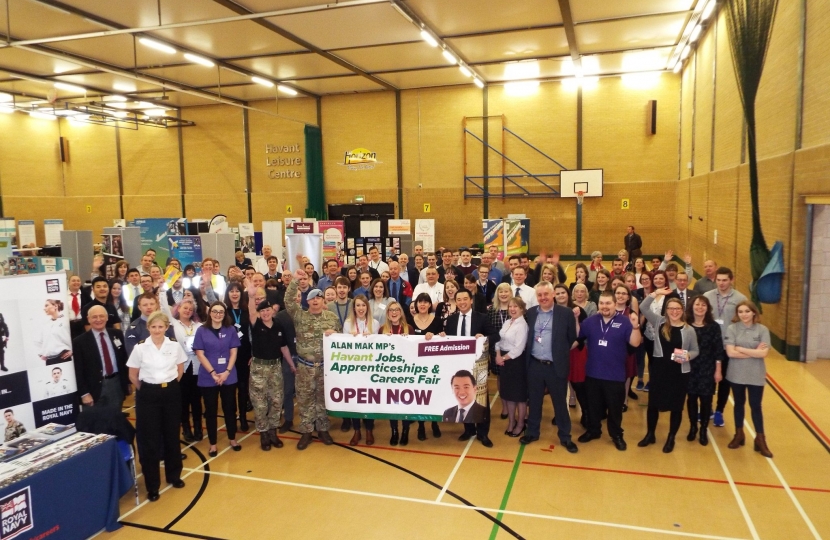 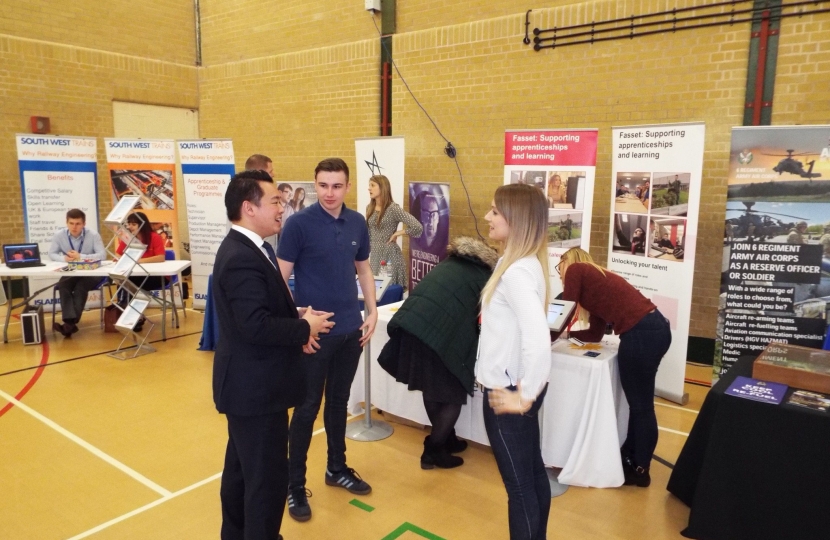 Havant Leisure Centre was a awash with people on Friday. Around 2,000 visitors flocked to the venue for the second Havant Jobs, Apprenticeship and Careers Fair, organised by local MP Alan Mak.

Now Havant’s largest ever jobs fair, it attracted more than 60 exhibitors from a range of sectors, offering a combined 900 jobs and apprenticeships. On the day job seekers from across Havant, Hayling Island and Emsworth came to find out more about what is on offer locally.

Mr Mak said he organised the fair for the second year running in order to help boost the local economy, as well as helping more ordinary families back into work.

He said: “My top priority for Havant building is a strong economy and helping local residents. So many local firms exhibiting at my fair shows our area is thriving. Many businesses are taking the opportunity to grow and take on new staff, such as Fat Face, who will soon be opening a new distribution centre at Dunsbury Farm.

“That means more jobs for local people and it has been fantastic to showcase exactly what is on offer. I believe that everyone should have the opportunity to work, and hopefully many people will have found employment or apprenticeships after today.”

Aside for the job hunters, a number of local schools attended the event, and many students took the opportunity to find out more about apprenticeships and careers at local firms.

Steve Webb, Senior Operations Manager at FatFace, said: "A really busy day at Alan's Fair with lots of local interest in our new distribution centre and the opportunities it will bring to the local community. We are really excited to continue are expansion and growth in Havant."

The fair is one of three major community events run by Mr Mak, who confirmed that the popular Havant Small Buiness Awards and Older Persons Information Fair will return later this year. Online nominations for the Small Business Awards are open and can be found at alanmak.org.uk

Twenty-one-year-old Peter Baker attended the fair. He said: ‘I’m looking for a job and I heard about this event through the Job Centre. I’m finding it difficult to get back into work, so I thought I’d come along and see what opportunities are out there."