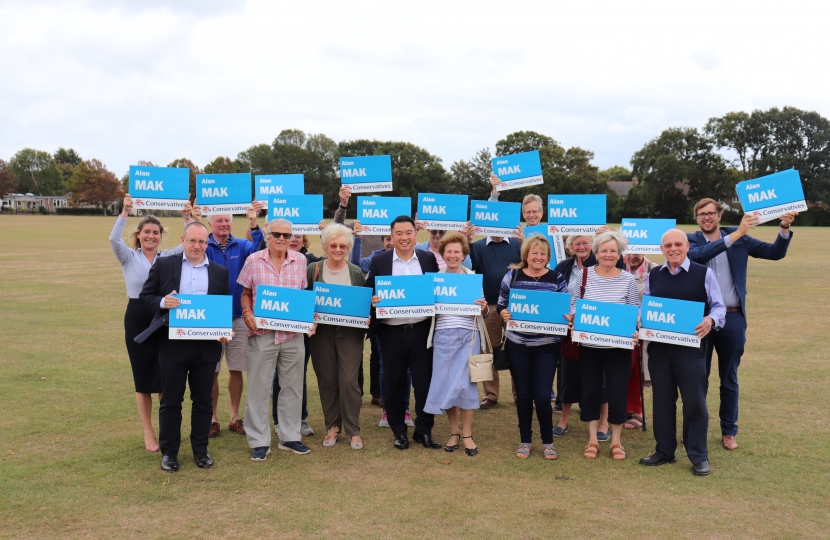 Alan Mak has pledged to continue working hard for the Havant Constituency if re-elected on Thursday 12th December 2019.

The Conservative MP Candidate for the Havant Constituency said that it has been a privilege to serve as the Member of Parliament for Havant since May 2015, and looks forward to continuing his engagement with residents in the coming weeks through doorstep conversations, leaflets and online activity.

Since first being elected in 2015 Mr Mak has organised several successful annual community events, including his Jobs Apprenticeships and Careers Fair, which year on year has helped residents into work or higher education; his Community Groups and Older Persons Information fair, which this year attracted more than 1,000 visitors from across the constituency; and his Small Business and Community Awards that promote outstanding small businesses and community groups in the constituency.

Boosting the local economy has been at the forefront of Mr Mak’s work in the constituency over the last four years, promoting existing businesses and our area as a fantastic place to start or grow a business. Through his Havant Business Fund, Mr Mak has helped with the creation of jobs and expansion of business. Furthermore, he has also succeeded in raising the profile of the constituency in Parliament as a business and industry hub.

He said: “As the Havant Constituency’s MP since 2015 I’ve worked hard helping residents, attending community events, and organising major initiatives like my Jobs Fair, Community Fair and Small Business Awards to support our residents and businesses. I’m delighted that Havant Conservatives have re-selected me for the general election on 12 December 2019, and I look forward to delivering a positive message about my record and work for local residents. If re-elected I’ll continue to work hard for residents across the Havant constituency.”

If re-elected Mr Mak has also reiterated his commitment to delivering Brexit, and backing the Prime Minister Boris Johnson as he delivers Brexit through Parliament.

He added: “Every vote for Boris Johnson’s Conservatives in Havant and across Britain gives the Government a stronger hand to deliver Brexit – and overcome the opposition from Jeremy Corbyn’s Labour Party and the Lib Dems. I’ve discussed Havant’s local priorities with the Prime Minister, and I’ve brought the Brexit Minister Robin Walker to Havant to meet local business and community leaders. People voted for Brexit, and I’ll work hard locally and in Westminster to make it a success for everyone.”

Havant Conservative Association Chairman, Edward Rees said he was delighted that members had re-selected Mr Mak as the Conservative Candidate.

He said: “Since 2015 Alan has been an energetic and hardworking local MP with a strong community focus, delivering results for the Havant constituency. We’re running a positive campaign highlighting Alan’s work locally and the achievements of the Conservative Government nationally. I hope residents will support us on 12 December to deliver a successful Brexit and ensure we have an effective voice for our area in Westminster again.”

Picture: Alan Mak with members of the Havant Conservative Association as he launches his re-election campaign.

Local MP Alan Mak has joined volunteers on the frontline across the Havant constituency delivering medical supplies and food to residents in self-isolation.