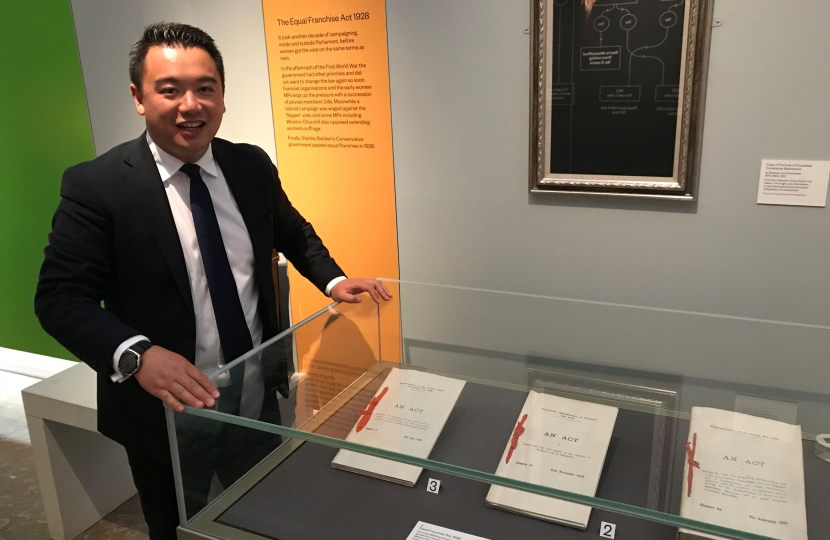 MP Alan Mak has called on residents from across the Havant constituency to visit an important new exhibition which tells the story of the fight by women to have their say in Parliament.

Voice and Vote: Women’s Place in Parliament is part of the anniversary celebrations marking the 100 years since some women gained the right to vote.

The exhibition not only tells the hidden “her-story” of the UK Parliament: the campaigning, the protests and the achievements. It also examines where we are today, and shows that anyone can make change happen and exercise their democratic rights.

Havant MP Alan Mak said: “This poignant exhibition tells the important story of how women won the right to vote – and the indelible mark they have made on politics in this country.

“Having visited the exhibition it further highlights how far we have come in boosting the number of women in politics – and I am proud to say that I serve Britain’s second female Prime Minister.”

He added: “I believe it is so important the people of the Havant constituency come and hear the story of this history. Not only should we remember those who fought for the democratic rights we have today, but I would urge everyone to make their voices heard in our democracy today.”

Among the items in this innovative exhibition are re-creations of lost historical spaces of the Palace of Westminster, rare and previously unseen historic objects, pictures and archives from the Parliamentary collections and elsewhere.

Visitors will delve into the past and discover what women would have experienced in: The Cage, The Tomb, The Chamber and The Ventilator.

Melanie Unwin, Co-Curator of the Voice and Vote exhibition, said: “This innovative exhibition immerses visitors in lost historical spaces, and shows the barriers that women had to overcome to participate in democracy. For the first time, we have recreated the sounds and atmosphere of the uncomfortable spaces which women were confined to – to show the magnitude of what campaigners and early women MPs achieved despite the limitations placed on them. Revealing this hidden history should help inspire us all to make use of the rights that women of generations past have dedicated their lives to.”

Further information about Voice and Vote: Women’s Place in Parliament including how to get tickets is available by visiting parliament.uk/get-involved/vote-100/voice-and-vote/