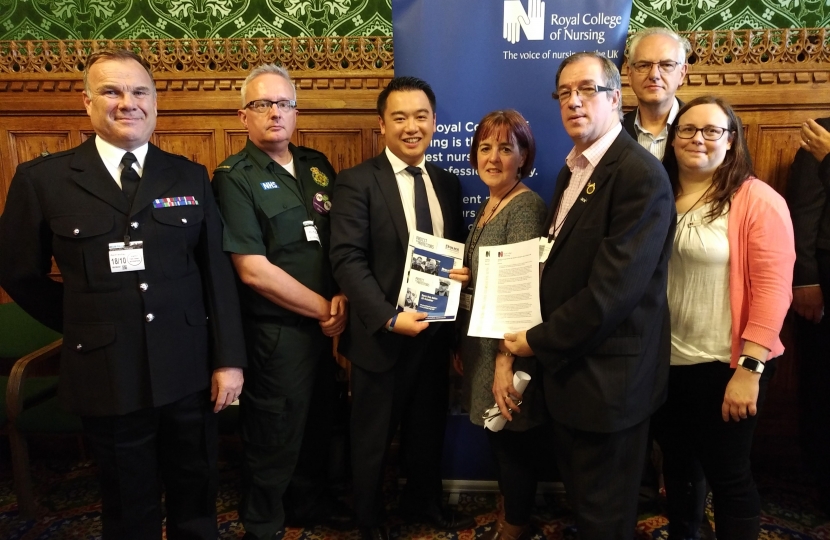 A new bill to ‘protect the protectors’, backed by Havant MP Alan Mak, will be presented to Parliament on Friday 20 October 2017.

Alan Mak MP, Parliamentary Private Secretary at the Ministry of Justice, is backing a Private Member’s Bill to provide stronger protection for Police and other emergency service workers who are assaulted in the line of duty. The Bill was put forward by Labour MP Chris Bryant who came first in a ballot of backbench MPs who wanted to introduce new laws.

If passed, the Bill would make assaulting emergency workers in the execution of their duty an aggravated offence.

It would also introduce mandatory blood testing for anyone who spits at police officers and their blue-light colleagues.

After meeting police officers and other emergency service workers in Westminster to support the Bill, Alan said: “Our emergency workers across Havant and around the country should be able to carry out their duties without fear of assault. I’m backing this law to create a new offence with an increased higher maximum penalty. We need to ensure that those on the front line of responding to life or death situations or upholding the law, have the full protection of the law. This Bill will provide Hampshire police and the Courts with the powers they need to deal effectively with those who use violence against our emergency workers.”

He added: “Our nurses, police officers and fire fighters shouldn’t be subjected to abuse and assault while protecting us. They deserve to be treated with respect. I will continue backing this Bill as it progresses through Parliament.”