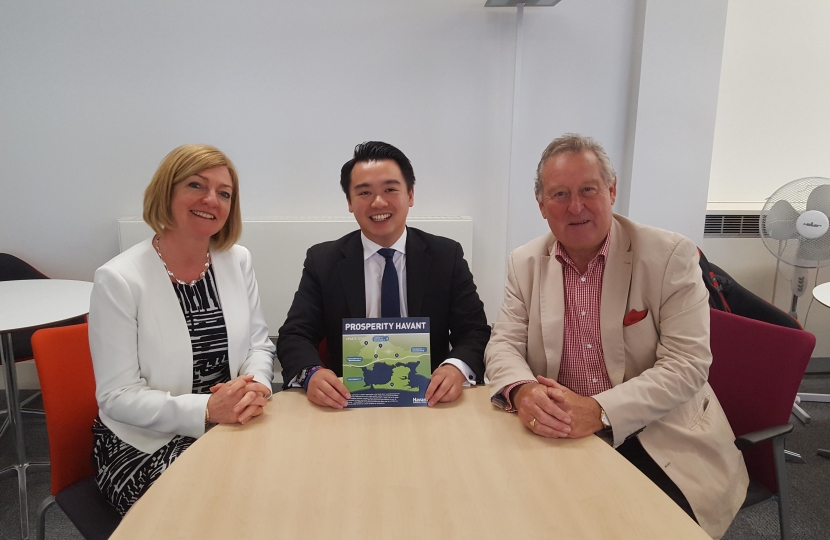 Havant MP Alan Mak has given heavyweight backing to the Borough Council’s ‘Prosperity Havant Plan’, which aims to unify development and economic growth strategy in the local area. Mak supported the idea as a ‘future-proof plan’ to help Havant grow and succeed.

Mr Mak was speaking after a tour of key projects across the Borough and meetings with senior members of Havant Borough Council. Sites earmarked for major developments include the transformation of Havant town centre and Market Parade, cutting edge business parks at Dunsbury Hill and Harts Farm Way, and a regenerated town centre for Waterlooville.

Havant MP Mak has been a notable supporter of the Prosperity Havant Plan since his election in 2015. In February 2016 he joined Housing Minister Brandon Lewis to cut the turf at P&I Generators’ new premises at Harts Farm Way, and has backed major local housebuilders such as Barratt Homes who will form a key prong of the holistic Prosperity Plan.

In December 2015, Mak also gained Chancellor George Osborne’s backing for the Dunsbury Hill Farm development, which will provide over 3500 new jobs for the local workforce and become a hub of business, innovation and skills training.

Alongside local councillors and businesses supporting the Prosperity Plan, Mr Mak was given a tour of the proposed Major Redevelopment Area in Waterlooville, and Dunsbury Hill Farm in Havant. Dunsbury Hill Farm is expected to create around 3000 new jobs, and clothing manufacturer Fat Face have recently been confirmed as the first tenant.

Following the tour, Alan Mak said: “Strengthening the local economy is my top priority as local MP, and I’m working closely with Havant Borough Council.  The Council’s “Prosperity Havant” Plan will secure jobs, growth and prosperity around Havant for years to come. This is a future-proof plan, bringing together businesses and residents to transform our town centres and give people a higher quality of life. It has my full support.”

The Havant MP added: “Whether it is the exciting regeneration of Market Parade, or thousands of new jobs at Dunsbury Hill and Harts Farm Way, Havant is on course for a prosperous future. I will continue working with businesses, developers and residents to keep our area prosperous.”

Leader of Havant Borough Council, Mike Cheshire, commented: “We are delighted to have Alan’s heavyweight support for the Prosperity Plan, which promises a unified approach to development and growth strategy across Havant.”

Cllr Cheshire added: “This is an ongoing project to deliver prosperity to Havant Borough. Developments at Dunsbury Hill and Harts Farm Way are progressing well, whilst there are exciting plans to transform Havant and Waterlooville town centres into real destinations for visitors and shoppers.”