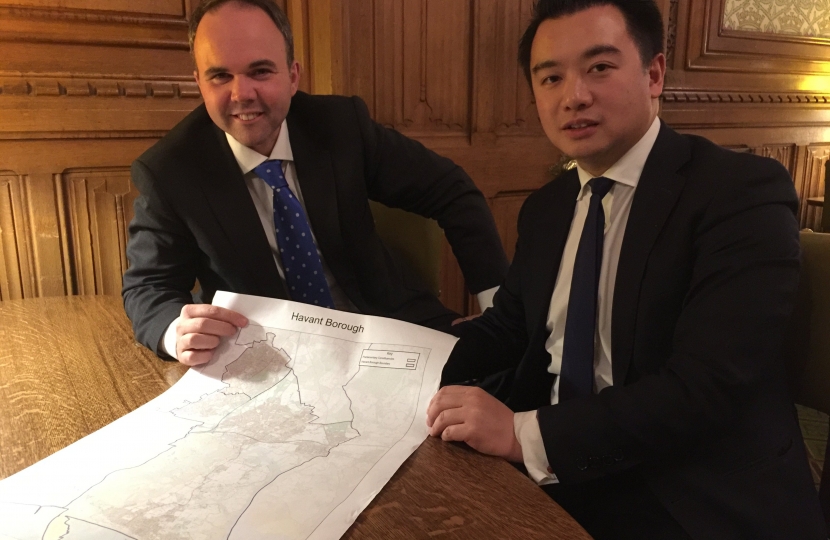 Local MP Alan Mak has given his backing to a bid from Havant Borough Council for funding to establish what infrastructure is needed to go alongside new homes earmarked the recently approved Local Plan.

A bid totalling £600,000, has been submitted to the Homes and Communities Agency for Central Government ‘capacity funding’ which will be key to delivering the necessary infrastructure. It will be used to carry out research into the infrastructure needs of the whole Borough.

The council approved its Local Plan Housing Statement at a meeting last week and it sets out sites which the Council considers could deliver sustainable development up until to 2036.

In addition Mr Mak brought Housing Minister Gavin Barwell on a visit to Havant, providing the opportunity for local council officials to speak directly to the Minister, and has discussed infrastructure needs with him.

Mr Mak said: “This capacity funding bid will help the Council establish what infrastructure is needed to support their Local Plan, and I’m delighted to back it. Once the Local Plan is finalised and adopted, and future infrastructure needs are fully known, I’ll also support bids to central government for infrastructure upgrades where funding from local sources like Hampshire County Council and the Solent Local Enterprise Partnership are insufficient.”

The Autumn Statement saw the Government announce new funds which local councils such as Havant Borough Council and Hampshire County Council can bid for. These include a new £2billion fund to support new housing infrastructure, £23billion for a new National Productivity Infrastructure Fund, some of which will go towards housing and infrastructure, and as part of that fund, £1.1billion is set aside to deliver upgrades on local roads and the public transport network. Mr Mak said he was committed to supporting local councils and other bodies like Solent LEP if they apply for national funds where local resources for infrastructure are not sufficient.

Havant Borough Council (HBC) has already committed to conducting a detailed infrastructure review examining what infrastructure is needed in each area earmarked for housing development such as Hayling Island. The review will include consulting the public.