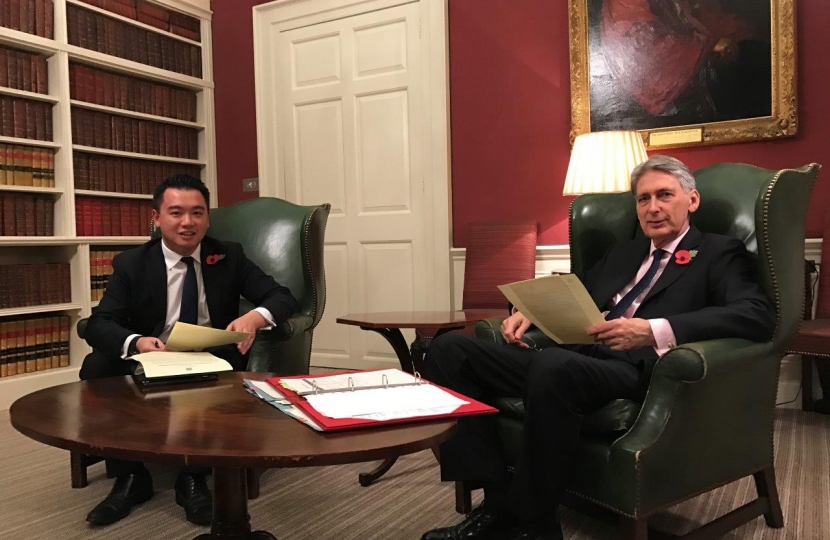 Havant MP Alan Mak urged the Chancellor to boost funding for the tech economy and entrepreneurs, and build a multi-million pound centre of innovation excellence in the Solent region, during a meeting with him ahead of the autumn statement next week.

The Conservative MP made a number of suggestions to Philip Hammond to build on his commitment to science and technology that he made during his conference speech, based upon a report Mr Mak published today for the Free Enterprise Group, backed by the Institute of Economic Affairs.

The report called on Britain to take the lead in the Fourth Industrial Revolution (4IR), a term that gained prominence when it was made the topic of the World Economic Forum’s Annual Meeting in Davos. It is defined by new advances in areas such as artificial intelligence, mass-automation and hyper-connectivity.

Some of these new technologies are becoming commonplace, with drones and smart household appliances connected to the internet, while breakthroughs in driverless cars and advanced robotics are just around the corner.

Mr Mak has made 20 policy recommendations to the Government on the 4IR, calling on them to implement a pro-innovation approach to the industrial strategy.

In particular he has called on the Government to provide funds for start-ups and entrepreneurs. The MP says he has met a wide range of local people in Havant wanting to start their own business.

Mr Mak also called for more funds for a Catapult centre in the Solent region, one of the only areas of the country without one. Catapult centres are physical hubs that house the very best of the UK’s businesses, scientists and engineers to work side by side on late-stage research and development – transforming high potential ideas into new products and services to generate economic growth.

It follows the commitment of the Solent Local Enterprise Partnership which has already announced a £3million fund for science and technology.

During his meeting with the Chancellor, Mr Mak said that a Catapult centre on the south coast could provide an incentive to bring new tech firms in the area.

He said: “The Solent region, and specifically Havant, has a long tradition of world-beating technology firms. From software companies such as IBM to defence manufacturers like Lockheed Martin and BAE Systems our skilled workforce of engineers and technicians is a match for anywhere in the country. That is why bringing all of these minds together in a Solent Catapult centre makes perfect sense.”

The plan for a Catapult centre was pitched to the Chancellor alongside a plan for a Government Catalyst Fund to support entrepreneurs and a proposal to create a National Research Institute for Robotics and Autonomous Systems.

He added: “We must build on Britain’s strong track record of innovation to lead the new Fourth Industrial Revolution. To do so, we must both seize the opportunities of Brexit and boost our investment in science and technology to stay ahead of the curve. The Chancellor announced new investment for the 4IR in his Conference speech, and I hope he will continue backing British science and technology in the Autumn Statement and beyond.”

His report Masters of the Revolution: Why the Fourth Industrial Revolution should be at the heart of Britain’s new Industrial Strategy was published on 14 November and can be downloaded here.

Picture: Alan Mak during his meeting with the Chancellor Philip Hammond