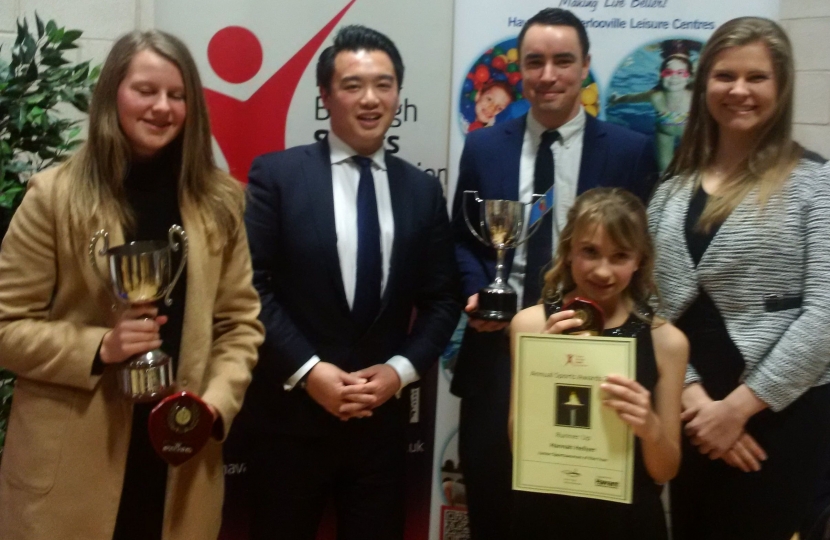 Havant MP Alan Mak praised the strength of Havant’s sporting community at the annual Havant Borough Sports Association Awards. The ceremony, which took place at Horizon Leisure Centre in Havant, recognised the work of dedicated volunteers and the achievements of local sportspeople during 2015.

Thirteen gongs were handed out during the ceremony, celebrating everybody from Havant’s Senior Disabled Sportsperson of the Year,Lorraine Lambert, to the Special Merit Award for outstanding achievement over the previous year, won by Kathlyn Houghton. Anyone living in the Havant Borough area, or who attends a school or sports club in the region, was eligible for nomination.

Havant MP Alan Mak said the awards ceremony was a real source of pride and inspiration for the local community. He said: “I was delighted to speak at the Havant Borough Sports Awards for the second year running. It is a terrific occasion where we can celebrate the outstanding sporting individuals and teams that we boast across Havant, whilst also recognising the selfless contributions made by those volunteers who make it all possible.”

Mak added: “I am a keen sportsman myself, and have supported local teams as much as possible since my election last year. I was privileged to be named as Vice President of Havant Rugby Club in November and was delighted to accept Honorary Membership of the Havant Hockey Club last month.  I have trained with the Men’s Hockey Team and look forward to playing in a Saturday fixture in the near future!”

The Havant MP added: “Sport is an excellent means of promoting community spirit, a healthy lifestyle, and charitable activity, and I was delighted to see such as strength-in-depth of sporting interest and achievement at the awards ceremony. I would like to congratulate all prize-winners and nominees, and thank Havant Borough Sports Association for organising another wonderful evening of celebration.”

John Hogg, Chairman of Havant Borough Sports Association, said: "we were delighted to welcome local MP Alan Mak to our annual awards ceremony for the second year running. Alan has proved that he is a keen supporter of local sports clubs and it was great to hear him speak to the prize-winners this evening."

Hogg added: "The Havant Borough Sports Association Awards continue to go from strength-to-strength. Tonight was a successful event and it shows just how popular playing sport and keeping healthy are to the Havant community.”