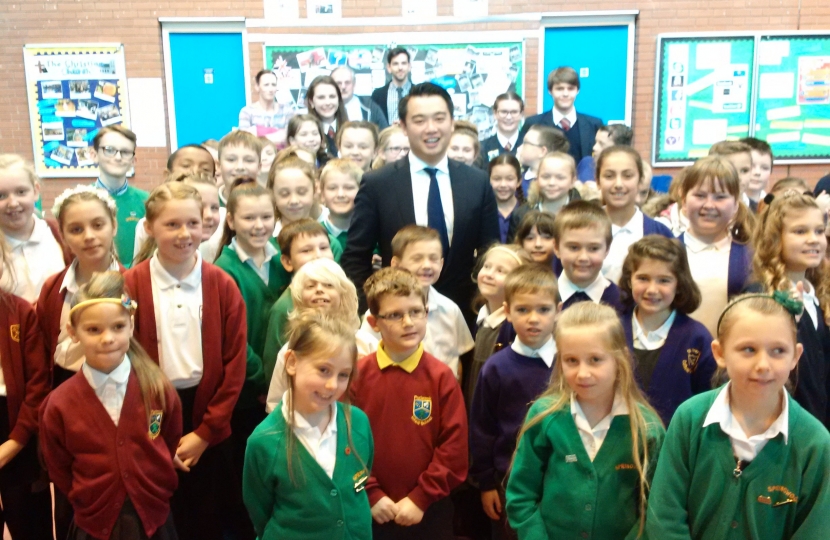 Havant MP Alan Mak was quizzed for over an hour by local school children on Friday 13 November 2015 on topics ranging from funding for sports in schools to smoking in cars and taxing sugary snacks.

Students who sit on school councils were invited to attend a question and answer session with Alan Mak MP hosted by Springwood Infant School, Stakes, Waterlooville.

Over 50 students attended, bringing questions from their classmates for the new MP who has put supporting local schools at the top of his list of local priorities.

This is the first time a local MP has agreed to answer questions from school council representatives from a range of schools a one sitting at an “Ask Your MP” event.

Topics raised by the students included: Alan’s role as local MP and his priorities for the area; free school meals for infant children; imposing taxes on sugary products; preventing littering of local playgrounds; raising awareness of the harmful effects of smoking in cars and near school gates; and funding for sports equipment.

Alan Mak MP said, “Supporting local schools and encouraging young people to share their ideas about how we can improve our community is an important priority for me. I was impressed by the quality of the questions from the students, and delighted to see so many schools take part. It was a fun, useful and interesting event, and I hope we can repeat it in the future.”

Jo Livingstone, Headteacher at Springwood Infant School, Stakes, Waterlooville, said, "This was a fantastic opportunity for school council members from Springwood and our neighbouring cluster schools to ask Alan questions. The children enjoyed the experience and felt that a range of subjects were covered. Alan's visits to school always generate a lot of excitement amongst the children, and we're delighted he's agreed to come in the future to support the school's activities"

Mak has written to every local secondary and primary school in his constituency, setting out ways he can support them, offering to visit their school, and inviting every school for a tour of Parliament. Any school that wishes to book a tour of Parliament, should contact Alan Mak’s Westminster office.

Separately Havant MP Alan Mak has written to the Prime Minister David Cameron calling on him to deliver fairer funding for local schools in his constituency.  Mak says schools in Havant typically received less per pupil than schools in other parts of the country such as London and Birmingham, and he has joined forces with other MPs facing similar funding challenges to lobby the Prime Minister.

Mak has written to David Cameron alongside other MPs who are part of the F40 funding campaign group which also supported by Hampshire County Council.